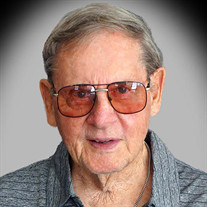 William Russell Peak Green Acres, FL – February 25, 1933 – September 25, 2021 William R. Peak, a longtime resident of Green Acres, Florida, passed away on September 25, 2021. William was known to friends and family as “Bill” or “Buddy”. William was born in Madison, Indiana to William and Mary (Bayne) Peak on February 25, 1933. William was raised as the middle child along with his two brothers by his mother Mary (Bayne) Potter and step-father Robert Potter in the small town of Madison, Indiana. William attended St. Michaels Catholic School in his developing years and graduated at Emmerich Manual High School in Indianapolis, Indiana. He excelled in mathematics and as a member of his high school basketball team, fell in love with the game of basketball. He enlisted in the United States Marine Corps during the Korean War in 1952. He reached the rank of Corporal as a Logistics Specialist stationed with the Third Marine Aircraft Wing located at MCAS Miami, Florida. William served four years in the Marine Corps where he met his wife Phyllis Query. They moved to Indianapolis, Indiana and later to St. Petersburg, Florida where they raised their five children. William was a very successful automobile salesman for the Ford Motor Company and later built his own small business where he became an Independent Building Contractor both in St. Petersburg, FL and Lake Worth, FL lasting over a span of fifty years. In his later years he was involved with his community of Green Acres, FL and always reached out to his neighbors with a helping hand to fix any home repair problems at little or no cost. William always enjoyed his boxer-breed dogs, a good cigar and a challenging game of chess. He is survived by his former wife Phyllis Ann Peak, sons Steven Russell Peak and David Wesley Peak along with his daughter Sheryl Ann Peak and seventeen grandchildren and ten great-grandchildren. He is predeceased by his brothers Bennie Peak and Buford Peak, his second wife Harriet (Dores) Peak, daughter Sandra Jean (Peak) Johnson and son Robert Morris Peak. William packed a lot of living into his 88 years. His “Man’s man” demeanor and genuine personality will never be replaced. He will be truly missed and always remembered with a good story to share and a smile on the faces of those that befriended and loved him. William had a funeral mass at St. Thomas More Catholic Church in Boynton Beach, FL and then laid to rest at the South Florida National Cemetery, 6501 S. State Road 7, Lake Worth, FL 33449 on October 20, 2021.

The family of William R. Peak created this Life Tributes page to make it easy to share your memories.