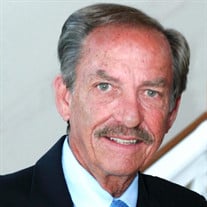 Virgil Robert Parker II (Bob), born and raised in Miami, FL, passed away peacefully with his 3 daughters by his side on August 13th 2021. Bob was a graduate of Miami Edison High School, Miami-Dade Junior College, Burnside-Ott Aviation Training Center (where he earned his Private Pilot’s license), and the Gold Coast School of Real Estate. Bob proudly served in the US Marine Corps and was honorably discharged. Bob’s professional career was well rounded but never strayed from the sales industry due to his ability to connect with those around him and build trust. Often referred to as “the life of the party,” Bob was everyone’s friend. He cherished his relationships, and his door was always open if anyone needed a place to call home. Bob lived a full life, always surrounded by his large family and many close friends. His favorite place was the ocean!!! He rarely passed up an opportunity to go fishing, water skiing, or to simply “hang out” with loved ones on the water, where his ashes will eventually be laid to rest. Just 2 short weeks before his passing, he could be found in his beloved Florida Keys on a family trip that had been a running tradition for the past 47 years! He will be remembered by his generosity and kindness to others, having an outgoing and friendly personality, his admirable zest for Life and living it to its fullest (under his terms, of course ), his willingness to always try something new, his infectious optimism, and his devotion to family. Bob leaves behind his 3 daughters and sons in law, Christie & Robert Greenspan, Laura & Michael Menard, and Tracey & Tyler Benson, along with his 5 grandchildren, Parker Greenspan, Carter Greenspan, Caiya Menard, Lily Benson and Brea Benson. We cannot forget his loyal, 3-legged companion, Ted!

The family of Virgil Robert Parker II created this Life Tributes page to make it easy to share your memories.