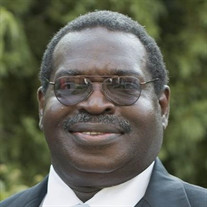 Vinnie L. McGee, 64, died on Friday August 27, 2021 at the VA Hospital. The son of Eddie L. and Wardine B. McGee, he was born on March 20, 1957, in Donalsonville, Georgia. Vinnie and family relocated to South Florida where he went on to graduate from Twin Lakes High School as a member of the Class of 1976. Following graduation, he served in the U.S. Marine Corps where he earned the rank of Lance Corporal. After an honorable discharge, Vinnie went on to spend 30+ years as an electrical technician for The City of West Palm Beach. On September 19, 1999, Vinnie married his childhood next door neighbor Magalie Pierre and settled in Royal Palm Beach with her two children, that he raised as his own, and their daughter. They celebrated 21 years of marriage together. Vinnie was a sports fan who enjoyed watching Florida sports teams play. He loved the Florida Gators and was obsessed with the Miami Dolphins. As the committed “Dolph-fan” that he was, he was quick to let you know that the Miami Dolphins were the only team to ever go undefeated and to have a perfect season. Vinnie enjoyed time with family, and was interested in nature, weapons and ammunition, and music. Vinnie is preceded in death by his father, mother, and brothers Lawrence D. McGee, and Darrall L. McGee. Vinnie is survived by his beloved wife, Magalie McGee; his daughter Marjorie Arnelle Pierre, M.D., and spouse Philip Monastra; daughter Vanessa McGee; his son Rudolph (Rudy) Pierre; his brother Eddie McGee Jr.; his sister Lola McGee; and grandsons Andre and Desmond Monastra. Vinnie is also survived by a host of nieces and nephews whom he loved deeply. A lover of animals, Vinnie also leaves behind his grandcat, Nala. The viewing will be held on Wednesday September 15th at 10am at Palms West Funeral Home. A service of remembrance for family and the closest of friends will be held at 12:00 PM and will immediately be followed by the burial. Vinnie’s permanent place of rest will be at the South Florida National Cemetery.

Vinnie L. McGee, 64, died on Friday August 27, 2021 at the VA Hospital. The son of Eddie L. and Wardine B. McGee, he was born on March 20, 1957, in Donalsonville, Georgia. Vinnie and family relocated to South Florida where he went on to graduate... View Obituary & Service Information

The family of Vinnie L. McGee created this Life Tributes page to make it easy to share your memories.