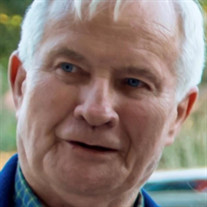 Thomas Jerome McCarty was born to the late Francis and Marie (Thibodeaux) McCarty in West Palm Beach, FL on August 28, 1940. He passed away on January 22, 2022 in West Palm Beach, FL. He was a graduate of St. Ann Catholic Church and School. He went on to graduate from the University of Florida in Mechanical Engineering. He retired from Pratt & Whitney, where he spent over 35 years as a successful engineer. Tom was blessed with a large and loving family. His Catholic faith was strong. He was a photographer at heart and was known to always have a camera with him. Tom is survived by his wife of 49 years, MaryLou (Kenney-Carr); his daughters Colleen (Rip) Ortega; Michelle (Tim) Peters; Sharon (Greg) Lewis; Debbie Carr Martin; and his son Craig (Donna) Carr; as well as thirteen grandchildren and fifteen great grandchildren. He was the oldest of eight children and is preceded in death by his brother Frank McCarty; and his parents. In addition to the above: We all know dad would want to list all of his grandchildren, their spouses and all his great-grandchildren. Dad was proud of all of them. Erin (Ryan) Roche with great-grandchildren Caelin, Riley and Liam Ryan (Raven) Carr with great-grand children Sloan and Declan Megan (Steve) Mussman with great-grandson Bryce Kenny (Amanda) Lewis with great-grandsons Bradley and Brett Kristen (Jason) Baxter with great-grandchildren Landon, Cameron and Ella Heather Martin Kyle Martin Justin (Deeanna) Ortega Meghan (Drew) Tuten with great-grandchildren Kameron, Micah, Emilia, and Anabelle Elliott Ortega Sam Ortega Nicholas Peters Abigail Peters Dad was also close with his siblings. Being the oldest of eight, in birth order: Tom (MaryLou) McCarty, Frank (Pat Pickering) McCarty, Katrina (Dan) Halfpap, Larry (Geri) McCarty, Mary (Dick) Lecuyer, Chris (Barbara) McCarty, Marilyn (Marty) Byrd and Greg (Joanne) McCarty....all with numerous nephews/nieces and grands....too numerous to list. They all gave him the opportunity to be involved with so many family events throughout his life. In fact, most events with our large family were guaranteed to be documented by dad with a camera in hand. I remember when we were kids on a trip and dad was setting up his old original Minolta SLR with a timer, focusing on us getting the aperture just right.......which could literally take him minutes to get it just right for his perfection ... (many minutes to the chagrin of all of us waiting)....while we would wave people past - as they never knew if they needed to wait for the photo to be taken. Some of the funniest moments was him setting the camera up, then having me come hit the timer once he got in place, since I could run and get back in place quicker. It was also not easy getting a picture of dad without a camera in his hand...as he never liked being the actual subject of the photographer. This became entertaining to some of us who liked a good challenge. I can confidently say, this is not just my story - it could apply to any one of us :-) ~Debbie

The family of Thomas J. McCarty created this Life Tributes page to make it easy to share your memories.

Thomas Jerome McCarty was born to the late Francis and Marie...