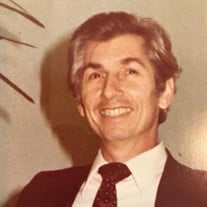 Theodore Cornell, 90, a longtime resident of Florida, passed away on Wednesday, Nov. 4, 2020, in Lake Worth, following a brief illness. Ted was born on Jan. 20, 1930, the eldest of six children, and grew up in the Bronx, graduating from Evander Childs High School in 1948. While serving in the Army for two years, he was assigned to machine records school in Fort Lee, Virginia, and found his career working with tabulating equipment – the forerunner of computers. Upon his discharge, he employed those early tech skills for the Army on Governors Island, N.Y.; at Farrand Optical Co. in the Bronx, and at British Motors Corp. in Ridgefield, N.J. He moved to New Jersey in the mid-1960s, residing in Essex and Hudson counties, and worked for many years in North Bergen at Jonathan Logan company, the manufacturer of women’s apparel. There, he became its director of management information services. At the time of his retirement, he was a programmer analyst for Jamesway Corp. He moved to Florida in 1989 with his loving companion of 53 years, Doris. Ted traveled extensively with Doris, and he was an avid gardener and reader. In addition to Doris, he is survived by sons Rodger and Philip; daughter Lisa Manos; brother Carl Cesiano; sisters Marie Frasco and Lenora Molnar; daughters-in-law Eileen, Diane and Ashley; brothers-in-law Bob and Joe; sister-in-law Alice; grandchildren Alicia, Daisy, Rodger, Trevor, Michelle, Diana, Paige and Cameron, and great-grandchildren Devin, Jake, Cole, Theo and Jillian, as well as by eight nieces and nephews and other family members. He is also survived by his second family: Guy, Doreen, Don, Jesse, Donny and Summer, Pat, Maryann, and Katie, Steven and many childhood friends. He was predeceased by his parents, Anna and Theodore; a brother, Larry; and a sister, Anne. A memorial service will be held at a future date.

Theodore Cornell, 90, a longtime resident of Florida, passed away on Wednesday, Nov. 4, 2020, in Lake Worth, following a brief illness. Ted was born on Jan. 20, 1930, the eldest of six children, and grew up in the Bronx, graduating from Evander... View Obituary & Service Information

The family of Theodore Cornell created this Life Tributes page to make it easy to share your memories.