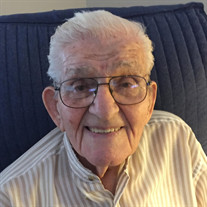 After 91 years here with us, Stanley Grabinski "went home" on July 11, 2019. He was a good man who lived a fulfilled life and will be greatly missed. Stanley, born in Nanticoke, Penn. on July 7, 1928, moved to Ct at the age of 15 with his father Stanley Sr., mother Celia, sister Eleanor, and brother Leo. At 19 he joined the army and became part of the team that developed Thule Air Force Base in Greenland. He nearly lost his life when the "Duck" he was in, hit an iceberg and sank. He was pulled out of the ice water by his comrades. While still serving, he married Lillian Hongo and started his family. After leaving the Army he had several factory jobs and a landscaping business in CT. His wife and daughters, Jeannie, Linda, and Susie, as well as his parents, all relocated to Florida in the 70's. Here he took a custodial job with the PBC Schools and spent many of his years' prior to retirement, as head custodian at John I Leonard High School. "Stan the Man", as he was often called, carried many fond memories of his time at that school. While in Fl his family grew to include his granddaughter Melisa and 2 grandsons, Tyler and Tanner. Gramps and Poppy later became Greatgrandpa to Stephanie, Trevor, and Morgan. The husbands of "his girls", Kevin Carson(Sue), Wayne Chitty(Linda), and Bruce McAdam(Melisa) and Melisa’s father, John Casey also loved him like a dad. Stanley, the last to leave, joins his parents, siblings, 2 nieces, a nephew, and his beloved grandmother, on "the other side". Besides his wife and family, he leaves behind sister-in-laws, and many nieces and nephews. As to Stanley’s request, no services are being planned, but his life will be honored at a small family gathering. Condolences relayed through this website, palmswestfuneralhome.com., will be most welcome. Safely Home ​I am home in heaven, dear ones; oh , so happy and so bright!  There is a perfect joy and beauty in the everlasting light.  All the pain and grief is over, every restless tossing passed;  I am now at peace forever “Safely Home” at last!

After 91 years here with us, Stanley Grabinski "went home" on July 11, 2019. He was a good man who lived a fulfilled life and will be greatly missed. Stanley, born in Nanticoke, Penn. on July 7, 1928, moved to Ct at the age of 15 with his father... View Obituary & Service Information

The family of Stanley F. Grabinski created this Life Tributes page to make it easy to share your memories.

After 91 years here with us, Stanley Grabinski &quot;went home&quot; on...