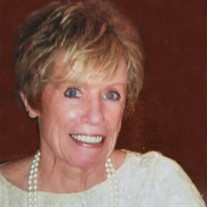 Sheila Ann Stamile, died unexpectedly August 20th, 2019. She was born on November 25, 1936, in Manhattan, New York, the daughter of Felix M. and Julia (O’Sullivan) McCarthy. During her early years, her family moved to Cedarhurst, Long Island. Their family home was always filled with Sheila’s friends, sometimes dancing in her mother’s kitchen to the latest tunes. She worked at the local movie theatre and exchanged her weekly paycheck for the latest styles at the Toby Shoppe on Central Ave. Sheila graduated from Lawrence High School, Class of 1953. Following graduation, she married the love of her life, Arthur J. Stamile in 1955. They celebrated 39 years of marital bliss starting their lives in Inwood New York. Sheila always had a kind word to share with those she knew, and this home became a magnet for friends and family. They moved to Delray Beach, Florida in 1969 where they raised their family. Sheila worked at Barnett Bank during this time as a Customer Service Manager where she excelled at solving her customer financial inquires. She received fan mail from her customer who raved about her assistance. Sheila moved to Wellington Florida, where she lived for several years after Arthur passed away in 1994. She followed her daughter Linda to the Space Coast, Titusville, Fl, and lived with her daughter Linda in both Mansfield, Texas and most recently, Orlando, Florida. Sheila volunteered at the Titusville Parrish Medical Center and could always be found at the local YMCA or at her local library where she gathered many a book to read in her leisure. In addition to her parents, she was predeceased by two sisters Patricia Bradshaw and Sr. Mary McCarthy. Surviving is her most adored brother Felix M. McCarthy, son Andrew Stamile and his wife Alida of Palm Springs, daughter Linda Batista and her husband Julian of Orlando and Daughter Kimmie Stamile and Allen Chapman of Ocala, Fl. Her grandchildren were very special to her. They included Andrew Stamile, Jonathan Stamile and Monica Stamile of Palm Springs, Michael Amendola and his wife Erika Roa Amendola of Boca Raton, Florida and her grand-puppy Cody Batista of Orlando. Sheila also enjoyed relationships with many cousins, nieces and nephews. A church service of remembrance will be held at St. Rita Catholic Church. Date and time to be announced. Their address is: 13645 Paddock Dr. Wellington Fl 33414. Flowers can be sent to this address.

The family of Sheila Ann Stamile created this Life Tributes page to make it easy to share your memories.