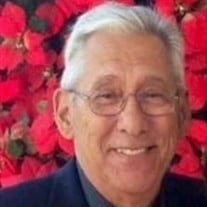 Rolando Valdivieso, 81 of West Palm Beach Fl lost his brave battle with senile cardiac amyloidosis on 6/27/2020. Rolando was born in Omaja, Oriente Cuba on 9/30/38 to his loving parents Francisco and Dolores (Lola) where he grew up with his siblings Teresa and Manolo. While in Cuba he graduated from Havana University with a concentration in public accounting. With the rise of the Castro regime in Cuba he began his journey to emigrate to the United States. He was able to come to United States landing in Chattanooga Tennessee through the United Methodist Church. He started in Tennessee working in a factory doing menial jobs doing whatever he had to do to make his way in his adopted country. He was able to resume his accounting career and moved to Chicago. While in Chicago he met and married his wife of 49 years Laura Valdivieso through family members. After the wedding they briefly moved to New York where he competed classes at Pace University to officially be an accountant in the US before settling down in West Palm Beach, Florida where he raised his two children Roland and Lily. He moved to West Palm Beach to take a job with Florida Crystals, Inc where worked for the next forty years becoming the director of accounting. He enjoyed his retirement by spending time with his family especially his grandchildren Andres and Elena being the best Abuelo and traveling the world. He was constantly interested and amazed by different cultures and countries. He was beloved by family and friends he was known as the family’s financial consultant and everyone loved discussing current events with him as he was always well read, had a great sense of humor, and listened to what everyone had to say. He is survived by his wife Laura, His children Lily, and Roland (Sara), his grandchildren Andres and Elena, his siblings Tere, Manolo (Mirtha), his nieces Lourdes, Mary, and nephews Manuel, Jorge, and Raul. He was a member of St Rita Catholic Church Rolando was beloved by all and will be sorely missed A celebration of life mass will beheld at St Ritas Catholic Church in Wellington on July, 2 at 1 PM a private internment will follow. In lieu of flowers the family would appreciate donations to be made to New Hope Charities. https://www.newhopecharities.org/donate/

Rolando Valdivieso, 81 of West Palm Beach Fl lost his brave battle with senile cardiac amyloidosis on 6/27/2020. Rolando was born in Omaja, Oriente Cuba on 9/30/38 to his loving parents Francisco and Dolores (Lola) where he grew up with his... View Obituary & Service Information

The family of Rolando Geronimo Valdivieso created this Life Tributes page to make it easy to share your memories.