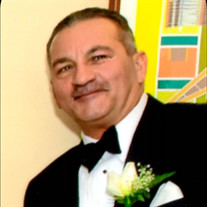 It is with profound sadness we announce the passing of Robert "Bobby" A. Ricciardi, 60, of Boston, Massachusetts. He passed away suddenly on Tuesday morning, August 4, 2020 in Delray Beach, Florida. Robert will be lovingly remembered by his mother Lorraine; daughter Elisa; sister Gina; brothers Francis and Ric; and numerous family and friends. He will be most remembered for his love and devotion to his family. He was generous and loyal to those he loved. His heart expressed acceptance for all humanity. Robert was born on August 7, 1959 to Albert and Lorraine Ricciardi. As a young man he played hockey at Catholic Memorial High School. Bobby was a high school superstar goalie, that was the level of talent Bobby possessed. From there he went on to be a scholarship goalie at Northeastern University where he was the starting goalie in the Beanpot Hockey Tournament held each year in the Boston Garden. One of the fiercest competitors to ever play sports. In addition to his athletic prowess, Bobby Ricciardi could handle himself around people with the skill of a seasoned politician. Articulate, intelligent, and possessing a heart of gold, Bobby was a born leader among men. Captain of every team he ever played on, a leader and mentor in any job or position he ever held. He inspired his fellow brothers and sisters to become better firfighters and most of all to be the best citizens. Most that have had the opportunity and pleasure of knowing and working side by side with Bobby over his decorated 30 year career in fire service say; that he was a "legend" and they were honored to have worked with him. His legacy will live on! Visitation will be held on August 11, 2020 from 10:00AM--12:30PM at Palms West Funeral Home, 110 Business Park Way, Royal Palm Beach, FL 33411. Only 10 people are allowed at a time. Followed by Mass at 1:00PM at Our Lady Queen of the Apostles Catholic Church in Royal Palm Beach, Florida. 100 Crestwood Blvd S, Royal Palm Beach, FL 33411. Memorial to follow immediately at Our Lady Queen of Peace, 10941 Southern Blvd, Royal Palm Beach, FL 33411. In Lieu of flowers, please make a donation in his name to the Tunnel to Towers Foundation. TUNNEL2TOWERS.ORG Visitation and Services by Invitation

It is with profound sadness we announce the passing of Robert "Bobby" A. Ricciardi, 60, of Boston, Massachusetts. He passed away suddenly on Tuesday morning, August 4, 2020 in Delray Beach, Florida. Robert will be lovingly remembered by his... View Obituary & Service Information

The family of Robert Anthony Ricciardi created this Life Tributes page to make it easy to share your memories.

It is with profound sadness we announce the passing of Robert...