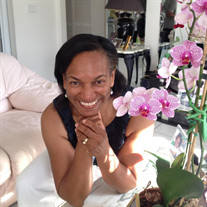 Paulette Morrison was born in Birmingham, England in February 1958 to her parents Kenneth and Esmay Hobbins as the fourth of five children. She later migrated to Kingston, Jamaica in 1966 at the tender age of 8. Her early education was at John Mills Primary School, then she attended Queens High School. After graduating from high school, Paulette worked at Jamaica’s Ministry of Health as a social worker in training. During this time, she attended University of the West Indies to further her career. Paulette moved to New York in 1983 and started working at the Department of Transportation. She attended LaGuardia Community College and completed her BSc in Information Tech at NY University. Paulette also made an important eternal choice of accepting Jesus as Lord into her life in 1987 and was involved in her church community wherever she lived. In April 1993, she married Derrick Morrison. They moved to Florida soon after they had their son Travis. Paulette worked at the Florida Department of Housing for a short time. Then, she moved on to do what she loved the most – helping people. Working with families and children was her passion. Paulette had many wonderful dimensions to her character. She was a detailed person who liked everything to be in order. She was kind, caring and giving, always willing to help and go the extra mile. Paulette was fun loving, gregarious, enjoyed socializing and going on family trips and events. With her creative artistic skills, she had great taste for nice looking things, and usually had an opinion on whether we should buy or not buy items on our many shopping sprees. From her youth, she spent time exercising, and motivated her sisters in creative/modern dancing and going to the gym. She got Yvonne to exercise by walking in shopping malls from day until night, much to Mommy’s dismay. She often told jokes which most of us laughed hilariously through – not really at the joke but at the way she was laughing through telling it. We would be laughing and asking each other “what’s the joke?”. She was aptly nicknamed “Laaffy Laaffy” by the late Uncle Willie from when she was a teenager. Daddy lovingly called her “Little Bus”. I never understood why. It was just accepted as her special name – she was the shortest of the five children. Paulette and her family have taken special care of Mom. Mom migrated to Florida after retirement just to live close to Paulette in 1999. They have lived as a tightly close-knitted sharing family ever since. Paulette leaves behind her loving husband Derrick and son Travis, her Mom, her sisters Beverly, Yvonne, Janet, her brother Collie, nieces Terri, Shareen, Riika, Nickeen, nephews Kahlil, Alan, grand-nephews Alijah, Jayden and Kristian. She also leaves behind Aunt Lois, cousins Claudette, Chuck and Basil Jr. in Jamaica. She is survived by many aunts, uncles and cousins both in the US and Jamaica. She is deeply loved by many. We will miss her beautiful smile, her infectious laughter, her kind and encouraging words of wisdom, her resilience to fight and overcome what’s in her path even if she had to toil a little longer, her sacrificial love of putting others before her personal concerns. We will miss her presence, especially those of us who were fortunate to have been touched by her sparkling life.

Paulette Morrison was born in Birmingham, England in February 1958 to her parents Kenneth and Esmay Hobbins as the fourth of five children. She later migrated to Kingston, Jamaica in 1966 at the tender age of 8. Her early education was at John... View Obituary & Service Information

The family of Paulette Morrison created this Life Tributes page to make it easy to share your memories.

Paulette Morrison was born in Birmingham, England in February...