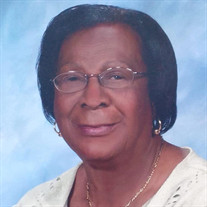 Olga Guscott 96, born to Obediah and Vinorah Harrison of Westmoreland, Jamaica, the fourth of nine children, departed this life on Sunday March 13th 2022. She was predeceased by husband, Michael, two brothers and four sisters. After leaving school, Olga joined the Jamaica Government Services in the Postal Department and then moved on to work with the Ministry of Agriculture, where she retired. After retiring she migrated to the United States of America, where, thereafter, Olga set out on her own to create a new pathway for herself which she successfully did. Aunt Olga was very dedicated to her family and friends. She was very active in her community work and church choir both in Jamaica and while living here in Florida. She was a team builder and someone you could call on at any time within the 24-hour orbit, especially when one of her family members were in need of assistance. She was always ready to give a helping hand with much fun and laughter. She was a giver, always donating to charities and to the less fortunate. Olga and her two sisters, Olive and Enid who lived in Florida and who predeceased her were always together like teen triplets, always going to the movies and dinner together. When the other sisters and brothers visited, it was on, and you would always no doubt hear Olga’s voice above the pack. When those sisters in Palm Beach became ill and subsequently passed, Olga was no longer the same although she accepted their illnesses. Olga was known to dance to her own beat and to her own drum, and what a beat that was. She never hesitated to voice her very strong opinions, solicited or unsolicited. Her sharp tongue was always ready with a response to anyone that challenged her, especially if you made the mistake of telling her she was old now. Indeed, she was known as the Harrison sister who spoke and said it as it is, often being considered to be “out of order” by the more reserved sisters. Nevertheless, to family and friends, her words were constantly followed by deeds of her forever kindness and “love”, Olga’s way. Also known to be the life of the party wherever she went. She was a lover of the Big Band music and lost no time in moving to the beat when possible. Being a strong willed and independent person, Aunt Olga will be remembered for driving herself around up into her late eighties, or early nineties, creating severe feelings of unease to those of us who took a closer look at her car and its “suspicious” dents, which she was always ready to explain away. Olga loved and cherished her only daughter, Sandra (Pam), and grandson, Rashied dearly, both of whom are her remaining survivors. She also leaves to mourn two sisters, Carmelita Taylor (JA) and Lillian Laing (JA); nieces and nephews; relatives and friends. Olga loved God, family and life. She served humanity well and will long be remembered for her sense of humor, her style and vest for life. May her soul rest in peace eternal.

Olga Guscott 96, born to Obediah and Vinorah Harrison of Westmoreland, Jamaica, the fourth of nine children, departed this life on Sunday March 13th 2022. She was predeceased by husband, Michael, two brothers and four sisters. After leaving... View Obituary & Service Information

The family of Olga Lee Guscott created this Life Tributes page to make it easy to share your memories.

Olga Guscott 96, born to Obediah and Vinorah Harrison of Westmoreland,...