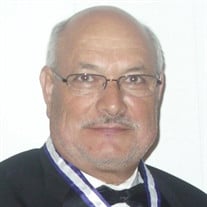 Nicola “Nick” Alessandria of Royal Palm Beach, Florida passed away on Tuesday, July 6, 2021 at his home surrounded by his loving family at the age of 79. He leaves his beloved wife of 53 years, Giuseppa “Mary” (Melfi) Alessandria; His daughter Francesca (Alessandria) Lefebvre and her husband Mark, of Leominster MA; His daughter, Genetta Alessandria of Royal Palm Beach FL; His daughter Lisa (Alessandria) Ryan and her husband Joseph of Royal Palm Beach FL; His son, Domenico Alessandria his wife, Amy (Klingenback) of Clayton NC; six grandchildren: Brandon Lefebvre, Calista Lefebvre, Dylan Ryan, Hayden Ryan, Celia Alessandria, and Josephine Alessandria. Three sisters, Lina and her husband Vittorio Vicinanzo; Maria and her husband Michael Renda; Rose and her husband Paul Buhagiar; Brother-in-law Ralph Antonio and his wife Dina Melfi; and many beloved nephews and nieces. Nick was born on December 5, 1941 to Giuseppe Alessandria and Francesca Farfaglia Alessandria in Vibo Valentia, Italy. He was 14 years old when he and his family immigrated to Toronto, Canada. At the age of 24, he met the girl next door and married her on July 15, 1967. With a drive to succeed and a strong work ethic, he was small successful business owner. Then, he immigrated to the United States 1982 becoming a resident of Royal Palm Beach, FL. In 1996, he proudly became a citizen of the United States of America. Nick had a passion for his fruitful garden, his powerful faith, and selfless hours of volunteering. He is an original parishioner of Our Lady Queen of the Apostles Catholic Church. He had a calling to serve faithfully as a Sacristanian, Eucharistic Minster, and an Usher. He was a dedicated long-standing Brother of the Knights of Columbus. With the Knights of Columbus, he was a Grand Knight and a Fourth Degree Faithful Navigator. Some of charities closest to him are The Special Olympics, American Red Cross Blood Drives, and American Cancer Society. Some of his favorite K of C events were the Veterans Christmas Party at the VA Hospital, Spaghetti Dinners, Fall Festivals, and Fish Frys during Lent. He was an avid bowler, a fierce poker player, a bocce master, and an ice hockey fanatic. Nick had a charismatic energy about him. He always welcomed strangers with open arms, who became friends, and ultimately a part of his family. Nothing made Nick happier than having family and friends around to salute a glass, enjoy a meal, and celebrate life. A celebration of his life will be held 2pm, Friday July 9 at Our Lady Queen of the Apostle Church, 100 Crestwood Blvd, Royal Palm Beach Florida. Burial will follow at Our Lady Queen of Peace, Royal Palm Beach. Visitation will be at Palms West Funeral Home July 8, 2021 from 5pm to 8pm. In lieu of flowers donations can be made to Vitas Hospice or St. Jude Children’s Hospital.

The family of Nick F. Alessandria created this Life Tributes page to make it easy to share your memories.