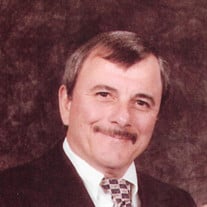 My beloved Mike was called home to the Glorious Kingdom of our Lord on September 8, 2021, after a long, heroic battle with Alzheimer’s disease. He was born in Akron, Ohio, on July 14, 1941, to Mary and Dewitt Clausen, and moved to Miami, Florida at a very young age. He attended Our Lady of the Elms and Christopher Columbus. He also attended St. Leo in Northern Florida. Mike loved our Lord and his Catholic Faith. He was an Usher at the 6:30AM Mass at St. Juliana for many years and also attended weekday Mass at St. Luke. Mike was an outgoing, fun-loving person and no one was a stranger to him. He had many interesting stories to tell and we loved hearing them. He lived life to the fullest. His doctor once told him that he was in such great shape that he could live to be 100. I believe he would have if not for this horrible disease. Mike was a man of many talents. He got his pilot’s license at age 16, before his driver's license. He fueled airplanes at Miami International, was a machinist at General Dynamics in California and Pratt & Whitney in West Palm Beach, a Fireman with the West Palm Beach Fire Department, and a great impersonator of Donald Duck, which the kids enjoyed. In 1981, he found his true calling and opened his own business, “Michael’s Custom Interiors”. We loved to travel. First by car, visiting Mt. Rushmore, Niagara Falls, Las Vegas, Booth Bay and Bar Harbor Maine, Washington D.C., Gatlinburg TN and numerous other places. Looking for a less strenuous mode of travel we turned to a more relaxing one – cruising, and we loved it. Mike was a gentle, kind, and loving soul. I was asked by many if Mike was aggressive or hostile because of the Alzheimer’s - Mike was the same kind and loving person as he always was. Mike was predeceased by his parents Mary and Dewitt, brother Peter Clausen, sisters Gloria and Angela. He is survived by his wife of 38 years Holly, his two sons Mike Worley of Greenwood, SC, and Mark Burmeister and grandson Brandon of Tennessee, many in-laws: sister in-laws, brother in-law, nieces and nephews, great nieces and great nephews, and many, many friends. I will hold you in my heart until I can hold you in Heaven. May the Peace of our Lord be with you. I Love You.

My beloved Mike was called home to the Glorious Kingdom of our Lord on September 8, 2021, after a long, heroic battle with Alzheimer&#8217;s disease. He was born in Akron, Ohio, on July 14, 1941, to Mary and Dewitt Clausen, and moved to Miami,... View Obituary & Service Information

The family of Michael Joseph Clausen created this Life Tributes page to make it easy to share your memories.

My beloved Mike was called home to the Glorious Kingdom of our...