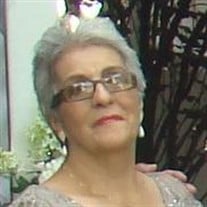 Marina C. Bello, age 77, passed away peacefully in West Palm Beach, Florida on November 8, 2019. Marina was born December 8, 1941 in Bogota, Colombia. It was there that she met the love of her life and future husband Luis Alfonso Bello. After much persistence on Luis’s part for over a year trying to convince Marina to go out with him, she finally gave into one date with him. From that time forward they were inseparable, and married December 22, 1962. They lived a life together filled with love and devotion for the next 57 years. Soon after they married, they started a family, having two sons and a daughter. Luis moved by himself to America in hopes of a better life for himself and his family. He worked hard to save to bring his wife and children out to join him. Marina and her three children immigrated to America in 1972, and settled in Yonkers, New York. Soon after, they expanded their family with the addition of another son. Marina and Luis lived in Yonkers for the next 37 years. Marina spent her life proudly caring for her husband and children. Her family was her top priority, and dedicated her life to them. As Marina and Luis’s family grew with seven grandchildren, it was clear that her world revolved around them as well, proving to be a devoted grandmother. She was conscientious of never forgetting a birthday, or holiday, and made sure to be filled in on everyone’s life milestones. Marina was most content when cooking for her loved ones. She insisted on full plates of her signature dishes to be consumed by those she loved most. She was proud of teaching others her recipes of her signature meals. She was also an avid lover of nature; specifically birds. It brought her great pleasure to watch them in their natural environment and would often feed them in hopes of them flying closer to her. After retiring to West Palm Beach with Luis in 2009, Marina enjoyed long walks hand in hand with her beloved, and nightly competitive games of Parcheesi with her close friends. Marina was a faithful woman, throughout her life. Attending church weekly, brought great comfort and solace to her. Marina is survived by and will be lovingly remembered by her devoted husband Luis, her children Luis Harvey Bello, Janette (John) Busetto, Nelson Bello, John (Esti) Bello, and grandchildren, Steven, Brendan, Bryan, Jillian, Angelina, Madelyn, and Avery. Marina is also survived by her two brothers, Jose Velandia and Guillermo Velandia. Marina leaves behind numerous extended family members as well. She was predeceased by her mother Benedicta Castro de Velandia. In lieu of flowers, the family requests that donations be made in Marina’s memory to St. Fisher Catholic Church of West Palm Beach. A memorial service will be held at 1:00 p.m. on Friday, November 15, 2019 at St. John Fisher Catholic Church of West Palm Beach, Florida.

Marina C. Bello, age 77, passed away peacefully in West Palm Beach, Florida on November 8, 2019. Marina was born December 8, 1941 in Bogota, Colombia. It was there that she met the love of her life and future husband Luis Alfonso Bello.... View Obituary & Service Information

The family of Marina Bello created this Life Tributes page to make it easy to share your memories.