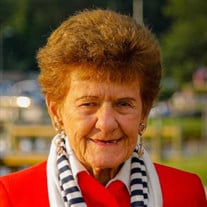 Marilyn Blackall Wheeler of Wellington, FL and Harwich Port, MA died peacefully at Trustbridge Hospice in West Palm Beach, FL on March 5, 2022 at the age of 93 following several months of declining health. “Mimi,” as her friends and family affectionately called her, was born in Providence, RI on April 26, 1928, daughter of Frederick Steele Blackall, jr. and Hazel White Blackall of Woonsocket, RI, subsequently of Cumberland, RI. She was predeceased by her husband of 55 years, Kenneth Gray Wheeler, in 2006 and her brother, F. Steele Blackall, III., in 2017. She is survived by her daughter, Gary Wheeler Hayes of Palm Coast, FL, her son, Gregory Walker Wheeler of Norwalk, CT and Vail, CO, her son, Douglas Hay Wheeler of La Jolla, CA, six grandchildren, and four great grandchildren. Mimi was a dedicated, warm, loving mother and wife who lived her entire life by the words she professed, “Life is too short not to be happy.” She often told others the most important things in her life were her family and animals, particularly her dogs and horses. Following graduation from the Mary C. Wheeler School in Providence, RI in 1945, she spent one year at Garland School For Homemaking (MA) and graduated from House In the Pines Junior College (MA) in 1948, where she was President of both The Riding Club and The Student Council. After her marriage in 1951 to Kenneth Gray Wheeler of Chester, VT, she resided with her family in Cumberland, RI at Orchard House Farm, her beloved family property, and The Lighthouse, her summer residence for 78 years, in Harwich Port, MA. For many years, she was active in volunteer work for the Woonsocket Hospital, The American Red Cross, and the Cerebral Palsy School. She enjoyed skiing, boating, tennis, and travel, as well as her club memberships at the Agawam Hunt Club in Rumford, RI, Stone Horse Yacht Club and The Harwich Port Tennis Association in Harwich Port, MA, Palm Beach Polo and Country Club in Wellington, FL, and Mayacoo Lakes Country Club in West Palm Beach, FL. She was an accomplished horseback rider with numerous trophies, awards, and championships starting from her days in college, and rode three days per week until the age of 90 on her beloved Morgan horse Tego. She loved Keeshond dogs, and more recently her Samoyeds, Kasper, Tymer, and Matthew. The family requests donations may be made in her name to The Vinceremos Therapeutic Riding Center (www.vinceremos.org) in N. Loxahatchee, FL, or to any animal non-profit organization of the donor’s choice. Memorial services are planned for this summer in the Historic Chapel at Swan Point Cemetery in Providence, RI. To express condolences, contact Palms West Funeral Home, Royal Palm Beach, FL.

The family of Marilyn Blackall Wheeler created this Life Tributes page to make it easy to share your memories.