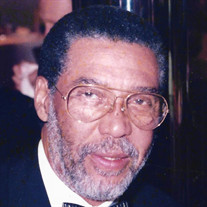 Lloyd George Campbell, son of the late Teddy Campbell and Enid (Coombs) Campbell, was born on April 26th, 1943 in Kingston, Jamaica. At the age of 23, Lloyd migrated to the United States. Shortly thereafter, he was drafted into the Army where he served for 2 years, with his last 9 months stationed at the border of North & South Korea. Lloyd, affectionately called “Lloydie” by his beloved wife Audrey (Rouse) Campbell, tied the knot on December 1st, 1973 in Newark, N.J. and established their residence in Willingboro, N.J. for 25 years. Lloyd was an early riser; his day began at 4a.m. for his hour long commute to Schering Plough where he worked for 30 years in production of their many pharmaceutical products which were distributed worldwide. After retiring from the Pharmaceutical industry, he and Audrey moved to their new home in Royal Palm Beach, FL in 2003 on the “encouragement” from their close friends Rev. Robert Selby and his wife Janice. The adventure of travel, fashion, photography, music & cars were just a few of Lloyd’s passions. He was quite adventurous flying in a hot-air balloon over the Serengeti Plains in Kenya; or trying to converse with the Chief of the Massai Village. In Egypt, he cruised the Nile and trampled the Rain Forest of Costa Rica…all the while indulging his love of photography and particularly close-up shots of amazing flowers. Lloyd had a keen eye for fashion…ergo, he loved to shop! His passion for music was remarkable…Lloyd was a music enthusiast! He would stay up all night, never sleeping just to test some new piece of musical equipment-blasting the sounds throughout the entire house. Travel captured Lloyd’s heart, he visited places like Egypt, Africa, Europe, China and Australia just to name a few; and cruised the Mediterranean & the Caribbean. Many of these trips Lloyd and Audrey often did with their best friends the late Bernard Dorsey and his wife Valerie. This friendship is unique, Audrey and Valerie have been more like Sisters…“Besties” for 36 years and Lloyd and Bernard were “Best Buds” for 26 years. Their story began when Valerie brought Bernard to the Campbell home to introduce him…really to get Audrey and Lloyd’s approval, on what was their very first date which inevitably was “a match made in Heaven”. Sadly, Bernard departed this life less than 2 weeks before Lloyd on December 5th, 2021… A journey these 2 “Besties” could never have imagined. They have built incredible memories together for over 36 years. Val said it best, “Knowing that Lloyd and Bernard’s friendship will live on forever beyond this life is a treasure and comfort”. She further shared, “God had a Master Plan when we came into each other’s lives so many years ago”. Lloyd sincerely loved his family. He leaves behind his beloved wife Audrey Campbell; his three children Bridgette, Denise & Wayne; his five siblings: Norman, Pauline, Bunny, Valerie & Howard; his three grand-children: Ashley, John and Nicole; his three God-daughters: Solei and Nevaeh Mossop and Keisha Dixon; along with a host of cousins and many wonderful friends. Lloydie will surely be missed…the memories we shared will be cherished forever. With Love…The Family

Lloyd George Campbell, son of the late Teddy Campbell and Enid (Coombs) Campbell, was born on April 26th, 1943 in Kingston, Jamaica. At the age of 23, Lloyd migrated to the United States. Shortly thereafter, he was drafted into the Army where... View Obituary & Service Information

The family of Lloyd George Campbell created this Life Tributes page to make it easy to share your memories.