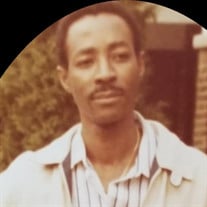 The Life and Times of LEONARD JOSEPH WALTERS Genesis: June 18, 1945 Exodus: June 20, 2020 “To everything there is a season, and a time to every purpose under the heaven” and this holds true for the life our dear husband, father, brother, brother in law, uncle, cousin, friend and neighbour Leonard Joseph Walters, also known as Donald and Bobzie. The time for birth was on June 18, 1945 in Kingston Jamaica, when Leonard brought joy to his parents Leanora Reid and Leonard Walters and joined his siblings Gloria (Peggy), Cordelia (Cherry), Arthur and Joyce. He was there to welcome his younger brothers Allan and John to that family. Leonard attended the Rousseau Primary school before moving on to the Denham Town Secondary School. At the end of his formal education he became a shoemaker’s apprentice. He would often recall his appreciation for his Aunt Ida who not only disciplined him when it was needed in his growing years, but she would occasionally take lunch to him when he was on the job. He did not pursue shoemaking but moved on to other jobs in Jamaica including working at a clothing factory, the Jamaica Defence Force as a soldier and the Jamaica Tourist Board where he worked as a tour guide. When he migrated to the USA he worked with various companies and did whatever was necessary to earn an honest living including being a coffee taster and working in security with Goldman Sachs. The time for serious love came when while working at the Etan Mills clothing factory he met and admired Beverley Smith. The friendship blossomed as they courted and they became man and wife on June 28, 1969 and as their vows stated only death has separated them 51 years later. Shortly after their marriage his wife decided to venture to the USA to seek a better life. Then came Leonard’s time to move. He joined his wife in the USA, and in addition to starting a new life, they also started their family as Junior later joined them to be their pride and joy. Miss Beverley would testify that Leonard was a good provider as they built their lives together acquiring and establishing their home. He was supportive of Junior in his various activities, especially his bowling tournaments. Leonard’s love for family was not limited to Bev and Jr. His love extended to all members of his family. He dearly loved his mother and Aunts Ida and Evadney, his siblings and their children. He was kind and he not only encouraged people in their pursuits but also would ensure that they had ‘a change’ to do whatever they needed. Leonard worked on helping his mom and brother Allan to migrate to the USA and his home was open to many family members at various times. There was the time to laugh and relax. Leonard enjoyed a good joke, as well as listening to music of the greats like Percy Sledge and James Brown. On Sunday mornings his stereo would be playing hymns and gospel songs and he would be reading his bible if he was not going to church. Did you know that Leonard was a part of a back up singing group and is named on the album? He loved photography as well as travel and he would always capture precious moments beautifully. He was a cool person and used Tai Chi as his usual exercise and relaxation routine. When asked how he was he would often reply ‘pretty good’. After living in Brooklyn for most of his life in the USA, Leonard and Beverly moved to fulfil their dream retirement in Florida. The dream of a long and fulfilling retirement was short lived as ill health affected Leonard’s life and on the morning of June 20, 2020 it was time for his exodus as Leonard answered the Master’s call and peacefully left us. He leaves behind Beverly, Junior, Gloria, Cordelia, Joyce, Allan, a host of nieces, nephews, cousins, in laws, other family members and friends. We will all remember him is a special way.

The Life and Times of LEONARD JOSEPH WALTERS Genesis: June 18, 1945 Exodus: June 20, 2020 &#8220;To everything there is a season, and a time to every purpose under the heaven&#8221; and this holds true for the life our dear husband, father,... View Obituary & Service Information

The family of Leonard J. Walters created this Life Tributes page to make it easy to share your memories.

The Life and Times of
LEONARD JOSEPH WALTERS
Genesis: June 18,...