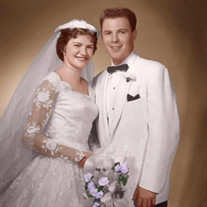 James (Jim) Louis DiCaprio died on July 22, 2018 in West Palm Beach, FL at the age of 82 after a long battle with cancer. He leaves behind his adoring wife, Eileen; and beloved children James (Jim), Thomas (Tommy), Linda (Amaral) and Susan. Jim was blessed with eight grandchildren that he loved dearly – Ashley, Brianna, Lauren, Tierney, Delaney, Nicole, Will and James. Jim was born in the Bronx, NY to James and Mary (Ciero) DiCaprio. He grew up in Yonkers, New York with two brothers and a sister and plenty of extended family, some of which came to the United States from Italy, like his father and mother. His father was a brick layer and Jim learned the trade working with his father during the summer in his early teens. Jim’s father died at a young age when Jim was only 20 years old leaving him the patriarch of the family to take care of his mother, Mary, whom he lovingly cared for and adored for decades after. Jim attended night school working towards a Mechanical Engineering degree while working full time as a draftsman at Materials Research Corporation (MRC). He proudly graduated from City College in New York City after 10 long years of working full time, studying and attending classes and raising a family. Jim met the love of his life, Eileen (Molloy) on a chance weekend getaway with friends to the New Jersey shore. Eileen was a Jersey girl, born and raised in Jersey City. Eileen happened to be away at the Jersey Shore with girlfriends that same weekend. They met on the beach and it was love at first sight for both of them. They dated for a year seeing each other on weekends when they weren’t working or at night school and married on July 18, 1959, exactly one year after they met. Jim and Eileen settled in Yonkers, New York living in two residences before they settled in their dream home, a gorgeous center hall white colonial, in Yonkers where they made wonderful family memories for three decades. Jim and Eileen moved to Florida in 2010; they were done with the New York winters. They rented in Ocala, Florida for two years until their son, Tommy could move down and find a place for the three of them to live in which they found in West Palm Beach, Florida in 2012. Tommy was a loving and selfless caretaker for his parents and especially his father in the months leading up to Jim’s death. Jim requested to be cremated. His ashes will be interred at Woodlawn Cemetery in the Bronx, New York at a later date. There will be no wake or funeral. As many who knew him know, Jim was a private man. Flowers are not necessary however, if you have a special memory of Jim, please send a note or e-mail to one of the family members. That would be especially appreciated. Memories are all we have now.

The family of James Louis DiCaprio created this Life Tributes page to make it easy to share your memories.