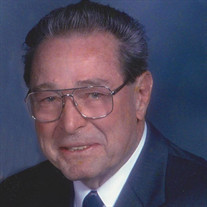 HOWARD F. COOK, JR. Howard F. Cook, Jr., age 95, passed away on November 29, 2020, surrounded by his family. He is together again with his wife, Pat, who predeceased him in 2016, and son, Greg, who predeceased him in 2011. He is survived by his son, Gary Cook (Jan) of Palm Beach Gardens; daughter Pam Cook Bohner (Jack) of Gainesville, GA; and grandchildren: Kristen Cook, Kevin Cook (Nicole), Alex Bohner, and Chris Bohner; and great-grandchildren Jesse Cook and Abigail Grace Cook. Howard was born in West Palm Beach on June 24, 1925 and attended Palm Beach High School, where he met the love of his life, Patricia. He joined the US Navy as a pilot and earned his wings just as the war ended. He then attended the University of Florida and earned a degree in Building Construction. Howard returned to West Palm Beach and developed successful construction business, known as Howard Cook General Contractor, Inc. Howard was very proud of his Palm Beach County roots and was involved in many organizations including, among others, the Palm Beach Jaycees and President of The Associated General Contractors. He also held dear his Christian faith and served on the vestry at Grace Episcopal Church. Later, he was involved as an active member of Holy Trinity Episcopal Church and, ultimately, was a member of St. Mark’s Episcopal Church. Howard was an avid golfer and even hit a hole-in-one at the President Country Club. He was one of the original members of the “Palm Beach High School Friday Lunch Bunch” (sometimes referred to as the ROMEO’s – Really Old Men Eating Out). Friday brunch at The Gun Club Café will never be the same. Above all, Howard loved his family and was dedicated to making sure everyone was happy. He will be remembered for his sense of humor, his love of life, and his selfless dedication to his family. His “cure all” was a shot of Jack Daniels, which earned him recognition and a spot as a Jack Daniels Tennessee Squire. Cheers to you, Howard! Due to the current Covid crisis, there will not be a formal memorial service. A family ceremony will take place at a later date. In lieu of flowers, contributions can be made, in the name of Howard Cook, to St. Mark’s Episcopal Church in Palm Beach Gardens (online at: https://church.stmarkspbg.org/)

The family of Howard F. Cook created this Life Tributes page to make it easy to share your memories.