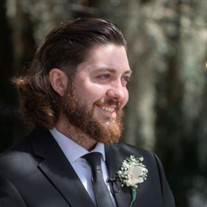 Harrison Blake Maharrey July 18, 1993 – October 12, 2021 Blake Maharrey, 28, of West Palm Beach, FL, passed away in an elevator work/industrial accident on 10/12/2021 in Aventura, FL. He was a beloved husband, father, son, brother. Blake was a veteran of the United States Marine Corps. He enlisted at the early age of 17 with the delayed entry program. He graduated from Seminole Ridge Community High School in June 2011 and left for boot camp in Parris Island, South Carolina three weeks later. He served his country for 5 years, achieving the rank of Sergeant during his service. While in the USMC, he was a jet engine mechanic and he was great with engines, etc. Later he became an elevator technician. He loved his work and was a proud veteran. Blake was funny, smart and quick witted with a touch of sarcasm. He loved big and he fiercely protected those he loved. His sense of humor was beyond most. He loved to joke and have fun. He was loyal to a fault. He was the epitome of an all-American guy. He was a kind soul and full of life. He met the love of his life, Alexa, and their story was one for the books. He was a newlywed as of 8/1/2021 and an expectant father. He would have been an amazing dad. He was one of the best humans to ever walk the earth. He is survived by his wife, Alexa, his parents, Rodney, and Angel, sister, Gracie, his brothers, Chase (Jamie), Dylan (Jessica), his grandparents, Diane Sims, Floyd and Jean Maharrey, his Aunt Theresa Maharrey along with numerous other relatives.

The family of Harrison Blake Maharrey created this Life Tributes page to make it easy to share your memories.