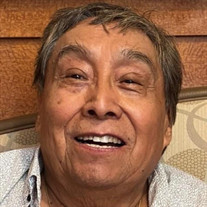 On Thursday March 11,2021 Guillermo “Memo” Hernandez, a loving husband, father, and grandfather passed away. Memo as born on February 10 ,1946 in Mexico City. On March 22,1970, he married Lidia “Lidy” Martinez Herrera. They raised their children in Mexico before relocating to Florida. Memo had many hobbies like painting,gardening, dancing, singing, and playing Candy Crush. His favorite foods was Italian food from Sal’s and anything Lidy would cook for him. His favorite favorite teams were the Pittsburgh Steelers and Cruz Azul. He loved collecting hats from his travels and of his favorite teams. He was know for his honest advice, humble beginnings and willingness to help others. He is survived by his wife,Lidy, his five children, Blanca(Jose),Omar(Bertha),Maria Elena, Betty(Tuna),Cindy(Juan). His two sisters, Lupe, Juana, his two brothers, Pedro, Verando. His 10 grandchildren; Natalie(Jason),Scott,Angel, Omar, Juan, Vanessa,Amy, Victor,Steven,Janette and his 3 great grandchildren; Juliana, Leonardo, and Jace. A mass service will be on held on Thursday March 18,2021 at St Peter Catholic Church in Jupiter at 2 PM. Due to Covid, a small family funeral service will be held at Palms West Funeral Home on Royal Palm Beach,FL.

The family of Guillermo Hernandez created this Life Tributes page to make it easy to share your memories.