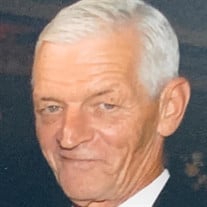 George William Johnson January 12, 1937-August 9, 2020 George Johnson, 83, went to be with the Lord on Sunday, August 9th, 2020 at his home in Wellington, Florida. He was a wonderful husband, father, grandfather, and friend who was dearly loved and will be greatly missed. George was born on January 12th, 1937 in Queens, NY to George and Catherine Johnson. George joined the Police Department in the late 60’s. He started off as a patrolman and moved to the mounted unit. It was a short stay because his wife Fran disliked the smell of horses on him when he came home. George was promoted to the Detective Bureau and joined the Robbery unit. From there he went on to the Narcotics and Homicide units. George loved being a detective and part of “New York’s Finest.” George and Fran met while he was a police officer in Brooklyn. They met at the courthouse in January of 1971 and George was in love at first sight. He refused to take no for an answer when asking for Fran’s number. They dated for one month before George “popped” the question. They married on July 10th, 1971. They would be married 49 years this past July. They went on to have five children together, Brian, Kevin, Kerry, Michael and Colleen and seven grandchildren, Colby, Katey, Brady, Emmy, Bryce, Aubrey, and Charley. Fran and George raised their children on Long Island where they spent most of their time devoted to their children’s sports and coaching on the soccer fields. They moved to Coral Springs, Florida in 1996 and then to Wellington, Florida in 2012 to be closer to their children and grandchildren. George was an avid hockey fan especially to his beloved Rangers. You could always find him in front of the television rooting them on. George loved spending time with his grandchildren. He adored them. George had a great sense of humor and will be dearly missed. A mass service will take place on August 28th, 2020 at 11am at Saint Rita’s in Wellington

George William Johnson January 12, 1937-August 9, 2020 George Johnson, 83, went to be with the Lord on Sunday, August 9th, 2020 at his home in Wellington, Florida. He was a wonderful husband, father, grandfather, and friend who was dearly... View Obituary & Service Information

The family of George William Johnson created this Life Tributes page to make it easy to share your memories.