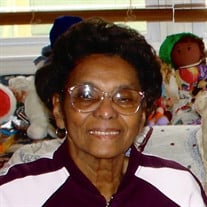 Erma Millicent Lee, née Reynolds, 91, formerly of Palm Bay, Florida, passed away at home in Wellington, Florida on February 28, 2021. Born 1929, at Hodges Land in the Parish of St. Elizabeth, Jamaica, Erma and her late husband, Benjamin Lee, came to the U.S. in 1969. They first lived in Queens, New York and moved to New London, Connecticut, when their daughters joined them in the U.S. In her new home, Erma maintained ties to Jamaica with delicious home-cooked dishes enjoyed by her family and many visitors. She worked as a bookkeeper for many years at Mystic Marine Life Aquarium, in Mystic, Connecticut and was their first retiree. In the early 1990s Erma retired with her husband to Palm Bay, Florida where many of their friends from New York and Connecticut resided as well as family members from Jamaica. After the death of her husband, she relocated to Wellington, Florida, to live with one of her daughters. Mrs. Lee was a talented ceramist and cook, who in her retirement enjoyed traveling with her husband and long-time friends, socializing with newer friends in her aerobics and bingo groups, and spending time with her grandchildren. Erma was a loving wife and mother, a faithful employee, and considerate employer. She will be remembered by many for her style, grace, and kindness. She is survived by her four daughters, Faith Lee, Marlene Lee, Eileen McNamara and June Lee; her sons-in-law, James McNamara and Andrew Fairbanks; and her four grandchildren, Benjamin and Peyton McNamara, and Emma and Nora Fairbanks-Lee. She is also survived by several siblings, nieces, nephews, cousins and friends. A memorial will be held at a later date to be determined and communicated.

The family of Erma Millicent Lee created this Life Tributes page to make it easy to share your memories.