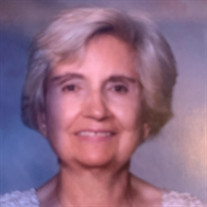 Emily Eugenia (Mroczka) Milanak, 97, of West Palm Beach, Florida passed away on December 15, 2020. While Emily was living independently and driving, she had a stroke and developed complications. Emily was born and raised on the South Side of Pittsburgh, PA. in the 1920s to her parents Jan Mroczka and Antoinette Barbara Osika who immigrated from Poland. Emily was the youngest of four children (Jane Sevinsky, Helen Peszko and Joseph Moreland, all deceased) and is the last of a wonderful generation of this Mroczka family. Emily was introduced to her late husband, Andrew David Milanak at a church dance by her sister Helen while Andrew was on naval leave. Emily worked for the Department of the Navy in Pittsburgh, PA during WWII. Emily’s warm personality was a match with Andrew Milanak (deceased in 1997) whom she married right after WWII ended. She was proud to be part of the Greatest Generation. They were married 51 years. Emily and Andy had four children, David Andrew Milanak (Zamina Farah) and Diane Crispell (Charles Crispell), both deceased and survived by Damian Milanak of West Palm Beach and Daniel Milanak (Susan R. Milanak) of Lake Forest, IL and Vero Beach, FL. Emily was compassionate and understanding. She stopped working to raise her family and her long term goal was to move to sunny Florida. She also loved to sew and dance. She treasured her sewing machine and loved tap dancing and watching professional dancing on TV. In 1970, the process of moving began. Emily was employed at Cape Canaveral AFB, IRS in Jacksonville, FL and the Naval Training Center in Orlando, FL where she retired from in 1988. Everyone would agree that Emily was a kind and loving person who was extremely sweet and congenial. She is survived by her daughters-in-laws, Susan R. Milanak and Zamina Farah and son-in-law, Charles Crispell, Esq. Her grandchildren are Michael Crispell, Tara Milanak (deceased) Matthew Crispell, Jesse Milanak, Marshall Crispell, Madison Crispell, Jack Milanak, Spencer Milanak, and Lauren Milanak. She also has 3 great grandchildren, Logan Crispell, Reece Crispell and Sienna Milanak. While viewing will be private for family only, there will be a public service and mass held December 28, 2020 at 11:00 am (EST). St. Rita Catholic Church, 13645 Paddock Drive, Wellington, Florida 33414. http://www.saintrita.com

Emily Eugenia (Mroczka) Milanak, 97, of West Palm Beach, Florida passed away on December 15, 2020. While Emily was living independently and driving, she had a stroke and developed complications. Emily was born and raised on the South Side... View Obituary & Service Information

The family of Emily Eugenia Milanak created this Life Tributes page to make it easy to share your memories.