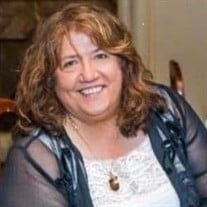 Elizabeth Ann Anderson, One Wicked Awesome Woman! Elizabeth “Beth” Anderson, earned her Angel wings on Friday, July 30, 2021. A New England Native. Beth was born Elizabeth Sylvester on October 16, 1958, in Providence, Rhode Island. She attended Catholic School throughout her childhood and earned her diploma at The Prout School in Wakefield, Rhode Island, in 1976. Although everything was Wicked Awesome in Rhode Island, Beth moved to Florida with her family in 1987. She worked in admissions at Wellington Regional Hospital, where she met many interesting characters over the years. The hardest working Mom. Beth was never one to take the easy way out. She worked endless hours, just to make sure her children always had everything they needed or wanted. After a few years of exploring different career fields, she accepted a job with the Palm Beach County Sheriff’s Office in their Fugitive Warrants Division, where she rocked it for the past 25 years. She recently entered the DROP Program and was looking forward to finally enjoying retirement in a few short years, because as she liked to put it, “I an Old Lady!”. Though she was only 62 years young when she was taken from us, nothing excited her more than looking forward to summers off so she would be able to take care of her beloved grandchildren. She dreamed about bringing them to her house every day to swim and spoil them rotten (as she always did!). The BEST Nana in the whole world. Beth is survived by 3 grandchildren, who she loved more than life itself. Her granddaughters, Skyla and Alyssa, and grandson, Maverick. Beth always said, “There is no love, like the love for your grandchildren… though I love my kids too, though.” Boy, did she show that. You could be a complete stranger that strikes up a conversation with her, and somehow, it turns into a conversation about “those grandbabies of hers.” There was not a better Nana out there for those three. She was the absolute greatest. There was NOTHING she wouldn’t do for those kids, or anyone for that matter. She would give you the shirt off her back, literally, I’ve seen her do it! There are a lot of people that say they will be there for you no matter what, then there are those who actually are. Beth was that person that you could call at 3am on a Monday, and tell her your car broke down and she was there as quick as she could put her pants on. No questions asked, she would be there for anyone. Whether it was taking care of a sick friend, or baking her famous cookies just because you told her you had a craving for them, she made it happen. She was simply the Best! They say the good die young, well, Heaven surely gained a great one. Saying she will be missed does not justify the emptiness that is left in so many of us with her being gone. Beth is survived by her father, Lawrence Sylvester; son, Tom and his wife Kathy; daughter Heather and her husband Bill, and of course the absolute loves of her life, grandchildren, Skyla, Maverick, and Alyssa, along with an abundance of friends who were family and adored her. Beth expressed her wishes not to have a Funeral, but rather a Celebration, or as she would say, “Go, Party!” Those who even slightly knew her, know there is no better party for Beth than a Christmas Party! A Celebration of Life, Christmas Style, will be held on Sunday, August 29, 2021, at 1:00pm, at the Twisted Tuna, 353 S US Highway 1, Jupiter, FL 33477. All are welcome to stop by, share a story or memory, or just come for a free hug! Casual attire. **If you have any Christmas attire, please wear it!**

The family of Elizabeth Ann Anderson created this Life Tributes page to make it easy to share your memories.