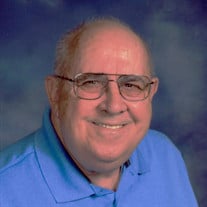 William Jackowski, passed peacefully with his beloved family by his side at home on January 14, 2021. He was predeceased by his parents, wife, Catherine and son, Timothy. He is survived by son, William (Tracy) Jackowski, Jr., daughter Shelby (Daryl) Walcher, daughter Kimberly Armour, and daughter-in-law Lisa Jackowski, and his grandchildren Zachary (Myriah) Jackowski, Cavan (Lauren) Chaires, Morgan (Jason) Chaires, Ashley (Alex) Carter, Marcus McDuffie, Cory Jackowski, Lauren Walcher, and William Jackowski, III, and great-grandchildren Wyatt Higgins, Teagan Carter, Grayson Jackowski, Cayden Chaires, and Nora Carter, his brother James Jackowski, sister Patricia Hiltbrand, several nieces and nephews and many lifelong friends. He was born on January 4, 1944 in Syracuse, NY to parents Joseph and Stephany (Minick) Jackowski. He joined in the United States Air Force when he was 18 years old. He served in the Air Force for a total of six years. Bill was Strategic Air Command at Anderson Air Force Base in Guam. He was part of Operation Arc-Light. He was a volunteer at the Fairmont Fire Department in NY for several years and made many friends there. Bill continued with his interest in airplanes by working in the commercial airline industry with USAir. His colleagues enjoyed his sense of humor and smile on his face every day. After 35 years with USAir, his retirement party was definitely one to remember. Bill married the love of his life, Catherine (Kasia), on July 27, 1968. They started their family in Camillus, NY raising four children. After many long winters in NY, he put in for a transfer with USAir to Florida. He decided to permanently move his family to West Palm Beach, Florida in 1988 and leave the winters of Western NY in his rearview. They were a great example to their children and instilled many family values they would carry on. The family house in Royal Palm Beach, Florida had a pool in the backyard and there were many pool parties that followed. Family and friends loved to gather at the Jackowski residence for every holiday, football game and Christmas was always a very special time for everyone. The Jackowski 40 Year Anniversary Party was an amazing display of the many years of commitment and love they shared. Bill had a great sense of humor and one that those who didn’t know him could be intimidated by, but those who knew him well would take his jokes with a grain of salt. He loved to laugh and make people laugh. He truly was light hearted and a sensitive family man. His family was the most important part of his life. He dedicated all of his time to his wife, children and grandchildren. His hobbies included building an entire garage of over 100 Lionel trains and tracks that he was so proud of and delighted to show off! Everyone loved seeing his new additions year after year as it was an awesome display. He was an avid golfer especially since his wife, Cathy, worked for PGA for decades. The Buffalo Bills were his favorite football team and he enjoyed watching the games. After longtime membership to the American Legion, he earned the prestigious title of Vice Commander of the American Legion Post #367. He was a member of the American Legion for over 20 years. At his local retirement community, he volunteered with Love In Action where he mentored a 7 year old cancer survivor, Jacqueline. She held a special place in his heart. In lieu of flowers, the family requests donations to the American Legion Post #367, P.O. Box 211782, Royal Palm Beach, FL 33421.

William Jackowski, passed peacefully with his beloved family by his side at home on January 14, 2021. He was predeceased by his parents, wife, Catherine and son, Timothy. He is survived by son, William (Tracy) Jackowski, Jr., daughter Shelby... View Obituary & Service Information

The family of William Joseph Jackowski Sr. created this Life Tributes page to make it easy to share your memories.