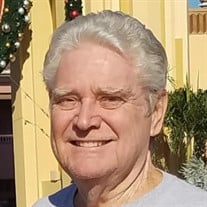 Wilbur Fred Hampton was born October 18, 1947 to Orren Arthur and Doris Parnell Hampton in Champaign, Illinois. Older brother Terry was thrilled to have a little brother. There were many Aunts and Uncles and was the youngest of all the cousins so he got plenty of attention. He was raised in the Church as all his family was and remained a man of Faith throughout his life. His love for animals and the outdoors led him to pursue an education in Wildlife Management at Eastern Illinois University in Charleston, Illinois. But the Vietnam War was escalating in the mid 60’s so he made the decision to join the Navy Reserves. By that time he had found Love and was not wanting to leave Sue and his Hometown to go half way round the world for active duty. But “Orders are Orders”! After serving 14 months in Japan as a Communications Technician, he returned in the summer of 1970 to marry his Soul Mate and Life Partner Sue Ann Cahill. A month later, he enrolled in Parkland Community College in Champaign majoring in Biology. He earned his Associates Degree and was able to transfer back to Eastern Ill. University to fulfill his dream of becoming a “Smokey the Bear” or “Ranger Fred”. But being a student by day and Postal Worker by night soon took it’s toll. Brother Terry stepped in at just the right time to offer a job to work for Glass Specialty in Quincy, Ill.. and his career in Auto Glass began. It was a happy three years there making friends, playing on Softball teams, and having Terry, Jeri, and nephews Jeff and Craig near by. The next move would be the last with Fred taking a Manager position with Glass Specialty of Florida in Lake Park, Fl. Terry and family had moved to the Sunshine State the year before and assured Fred he would no longer have to work outside in 10 degree weather in a foot of snow! Within the first year Fred and Sue bought a house, had their first son Justin, and were thrilled to be starting a family. Three years later, second son Aaron arrived to complete the “Fab Four”. Over the next 10 yrs. in between numerous trips with the boys to Disney World, Fred worked very hard to earn the reputation of being an outstanding and reliable glass technician and with the addition of Caren Hall to his Branch, the future was set. Many friends and customers convinced them to open their own Company, so they took a leap of faith and Gator Glass was born. It was successful from the start and thanks to their loyal customers, it is now the oldest independent Auto glass company in Palm Beach County at 34yrs. Fred loved his family, his friends, neighbors, and customers, some of whom have known him for over 30 yrs. All who knew him loved his beautiful smile, his kind and generous personality, and his passing has left a big hole in their hearts. He will be greatly missed but never forgotten.

Wilbur Fred Hampton was born October 18, 1947 to Orren Arthur and Doris Parnell Hampton in Champaign, Illinois. Older brother Terry was thrilled to have a little brother. There were many Aunts and Uncles and was the youngest of all the cousins... View Obituary & Service Information

The family of Wilbur Fred Hampton created this Life Tributes page to make it easy to share your memories.