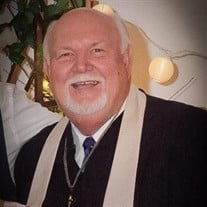 Just as the sun began to set on Friday September 27th... the Padgett family said goodbye to their loving husband and father, Rev. Wayne H. Padgett. He was chaplain and chum, minister and mentor, pastor and patriarch. After graduating in the first class of Palm Beach Atlantic University in 1972, he went on to attain a Masters of Divinity from Southern Baptist Theological Seminary. He became pastor at Plum Creek Baptist Church in Waterford, KY before moving back to Florida in 1986. For the next 7 years he served the congregation at Haverhill Baptist Church. For the last 23 years he was minister to Crossroads Baptist Church in Grammercy Park (a community he cherished and championed). During that time Wayne also served as chaplain for Fern House (a mens rehabilitation center). One of his greatest ministries was serving as chaplain for Trustbridge (formerly Hospice of Palm Beach County) for nearly 18 years where he helped countless families mourn the same way we are mourning now. He was husband to Gerry; Father to Stacey and Brian; Grandfather to Savannah, Jacob, Bella, Keiren, and Mackenzie; Big brother to Don and Friend to thousands. His passing is preceded by his parents (Doris and Harold) and 2 brothers (Kenneth and Gary). In lieu of flowers his family would love your help in continuing his great work by making a donation in his name to Crossroads Baptist Church or Trustbridge. A time of visitation will be held at Palms West Funeral Home on Saturday evening from 6 to 9. A service celebrating his life will be held at 2:30pm on Sunday October 6 at First Baptist Church (now Family Church in West Palm Beach) in the very sanctuary where he graduated college, became an ordained minister and married his wonderful wife. “...but those who trust in the Lord will renew their strength; THEY WILL SOAR ON THE WINGS OF EAGLES; they will run and not grow weary; they will walk and not faint.” Isaiah 40:31

Just as the sun began to set on Friday September 27th... the Padgett family said goodbye to their loving husband and father, Rev. Wayne H. Padgett. He was chaplain and chum, minister and mentor, pastor and patriarch. After graduating... View Obituary & Service Information

The family of Rev. Wayne H. Padgett created this Life Tributes page to make it easy to share your memories.