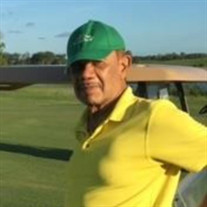 Wallace “Wally” Roberts Wallace George Roberts, 83, affectionally known as “Uncle Wally” to many was the son of the late Adrian and Edith Roberts. He was born June 23, 1937 in Kingston, Jamaica. Wally and his siblings followed their Mother to the United States where he completed his high school education in New York. In his early career Wally was a jack of all trades: NYC taxi driver, repo-man, and head clerk at a prestigious Manhattan law firm. A lifelong lover of the art of boxing, he spent his early adult years training at the then famous Gleason's Gym in Brooklyn where he entered into the Golden Glove championship in 1956. In later years, Wally utilized his talents and passion for boxing as a way to mentor youth, a hobby he carried throughout his life. In 1961, Wally joined the United States Air Force where he was stationed in Fort Biggs, Texas. Due to his experience and background, he was assigned a post in the Physical Conditioning Unit where he instructed classes in fitness and boxing. On December 22, 1962 he married Sylvia Orton. Together they raised three children in New York and were active in local civic affairs. Wally proudly obtained his Bachelor's Degree from Queens College, N.Y. which enabled him to rise through the ranks from Corrections Officer in the Queens House of Corrections to Assistant Deputy Warden at Rikers Island in New York. Wally participated in the Police Olympics Track Team and enjoyed travelling to compete in events all over the country. He was an active member of Westbury, New York, Police Athletic League where he mentored youth in the art of boxing. In 1985 Wally moved to Connecticut and after almost a decade enjoying his initial retirement, he went back to work, first as a substitute teacher and later at Connecticut Juvenile Detention Facility of New Haven. Wally often remarked that working with youth was much harder than working at the men's facility for violent criminals at Rikers, however, he served in his position for eleven years until finally taking up retirement in 2004. A deep lover of life, and notorious for being unable to stay still, Wally could be found enjoying a number of pastimes throughout his life including boxing, tennis, and running. He was witty, mischievous, always up for a good buffet, a game of Dominos and could play anyone under the table in Scrabble. Wally loved flea markets, free outdoor events, reggae bands and cruises, which he shared with a countless number of friends and family. Later Wally filled his retirement years with travelling, golfing, eating and living. He could often be heard offering sage advice to those around him, whether solicited or not. Among the most valuable life lessons he offered was to always maintain a calm head regardless of the situation, if there's music playing there's a reason to dance, and every price tag is negotiable. In 2005, Wally moved to Royal Palm Beach, Florida where he spent his final years doing what he did best - living life to the fullest. Wally peacefully passed away after a short illness on July 31, 2020. He is survived by: wife Donar Thomas-Roberts, children, Deborah, Wayne and Susan, nine grandchildren, brother Carl Roberts, nieces, nephews, in-laws, other family, and numerous friends, among them, Simeon Lewis and Regina Gonzales. Wally's love of life and "Wally-isms" will long outlive him and will keep his memory alive for those who knew him best, he will be dearly missed.

The family of Wallace G Roberts created this Life Tributes page to make it easy to share your memories.