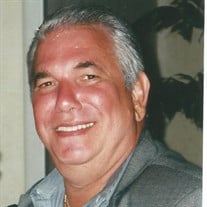 Vincent J. Bonvento, born March 19, 1946, passed away Monday, March 30, 2020, from complications following surgery. Vince spent most of his life in West Palm Beach, Florida, attending Conniston Jr. High, Forest Hill High School and graduating from Florida Atlantic University with a degree in finance. After school, he dedicated his service to the residents of Palm Beach County for over 40 years as Assistant County Administrator and as Director of Public Safety. Vince was the voice of calm during hurricanes and spent countless hours at the Emergency Operating Center to ensure the public was kept informed with the latest and most accurate information. He was held in the highest regard by his fellow coworkers and was well-known for his dedication to others as a board member of United Way, Lord’s Place and CARP for many years. Throughout his life, he exemplified selflessness, and was always willing to help others. He was the best friend anyone could have. He loved to spend time with the guys fishing, but especially snorkeling and scouting for lobster in the Keys! And he didn’t mind eating the lobster either! He always said, “There was nowhere else I’d rather be!” But, for Vince, there was nothing better in the world than spending time with family. He spent countless weekends at volleyball games supporting his girls, Andrea and Ashley, cheering proudly from the sidelines. He treasured every moment he could spend with them, whether it was grilling steaks for big family dinners and spending hours talking and laughing or just spending quiet time; they were his life. And then his heart was stolen the day his granddaughter, Kennedy, was born. His heart was full of excitement, elation, joy but most of all love, for his precious little Kennedy. Together, they loved going for long rides on his electric scooter and Vince would show her off to everyone - she was his heart, his pride and his joy. Vince is deeply missed by his loving wife Danielle, with whom he recently celebrated 50 years of marriage, daughters Andrea Bonvento (Stacey), Ashley Fogwell (Cody), granddaughter, Kennedy, his brother Bruce Bonvento (Shirley), nieces, nephews, and his many special friends. A service and celebration of life is being planned for the near future. In lieu of flowers donations can be made to The Lord’s Place or The United Way of Palm Beach County.

The family of Vincent J. Bonvento created this Life Tributes page to make it easy to share your memories.