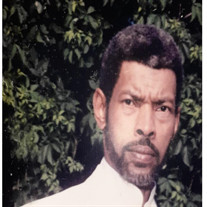 It is with great sadness that Vincent Bartley has been called home to his eternal rest with his Lord Jesus Christ on July 20th 2020 at 12:25 a.m. in Lake Worth Florida after succumbing to Covid-19, along with other health complications; he was 71 years old. Vincent was the only child born to the late Walter and Gertrude Bartley on December 2, 1948 in Manchester, Jamaica. Vincent leaves behind his loving wife of 25 years Grace Bartley and his loving daughter Destiney Bartley along with several stepchildren and grandchildren. He is predeceased by mother-in-law Una Morgan, father-in-law Cleveland Morgan and brother-in-law David Morgan. Vincent came to America from Jamaica for a better opportunity of life in the 90s and first lived in Bloomfield, Connecticut where he was a well-known painter. He also worked in the construction industry and was known as a “jack-of-all-trades.” Vincent then moved to West Palm Beach, Florida in 2005 where he retired with his beloved wife Grace and children. Vincent was passionate and had the biggest heart. He enjoyed being accompanied by his wife during his time of work. Vincent was colorblind, but Grace was his eyes. Vincent and his wife enjoyed mixing paint colors together, they even created their own personal color. That color has been in every home they have owned. Vincent was the best entertainer. He enjoyed singing and dancing, but singing was his true calling. His tone was beautiful enough to calm any beast. Vincent would also use his voice as he helped to raise his young grandchildren; he did that with honor and love. Vincent was a devoted father and husband; he had a big heart and could fill a room with his energy. He was a strong man from birth and because of that strength he never gave up on life, even during his worst days of pain. Vincent showed his family that no matter what life throws at you, never give up on yourself; keep fighting and Vincent fought until God called him home. He now dances with the angels. "Don't grieve for me for now I'm free, I'm following the path God laid for me I took his hand when I heard him call, I turned my back and left it all..."

It is with great sadness that Vincent Bartley has been called home to his eternal rest with his Lord Jesus Christ on July 20th 2020 at 12:25 a.m. in Lake Worth Florida after succumbing to Covid-19, along with other health complications; he was... View Obituary & Service Information

The family of Vincent Bartley created this Life Tributes page to make it easy to share your memories.

It is with great sadness that Vincent Bartley has been called...