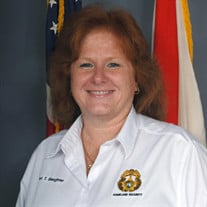 Tina M. Slaughter, 56, of Royal Palm Beach, FL, died on April 25, 2021, surrounded by her family after a brief illness. Tina will lovingly be remembered by her husband, Johnny, and by their children, Michael (30), Christopher (20) and Selena (16). In addition to her husband and children, Tina is pre-deceased by her parents, Mary Ann (Williams) and Louis Papitto and is survived by her brothers, Allen Papitto (Cathy) of Vero Beach and Bob (Darlene) Papitto of Duke, North Carolina, her in-laws, several nieces and nephews and many adoring extended family members and numerous friends. Born on October 3, 1964 in Fort Lauderdale, Tina realized her passion for public safety very early in life. Her father, Louis, was a firefighter which inspired Tina into a career of public service. At just 18 years old, Tina began her young career as a dispatcher at Stuart Police Department. She graduated from the Police Academy in 1983 and joined the Palm Beach County Sheriff’s Office on December 16, 1983. During her long, distinguished career, she served many roles including that of a long time Field Training Officer, Investigator, and Detective. Tina truly excelled at whatever assignment she happened to be working in. She was compassionate, empathetic, and always had a deep commitment to serving the citizens of Palm Beach County. Tina was not only admired and respected as a smart street cop, but even more so as a person in general for the way that she treated others. Tina had many fond memories of her years with the Palm Beach County Sheriff’s Office, including meeting her husband of 23 years, Sgt. Johnny Slaughter. After 27 years of service, on September 30, 2010, Tina retired from Palm Beach County Sheriff’s Office to focus on her favorite role, which was being a mother. Tina was steadfast in taking care of her three children, from taking her two youngest to school and supporting her oldest Michael while serving our country in the Marines. As the two youngest became young adults, she was taking Christopher to his debate competitions and Selena to her travel soccer games. Tina was always known for taking pictures at Selena’s soccer games and always being there to support the team. Tina will always be remembered for her generous spirit and love of traveling. Her passion for helping others was contagious and her devotion to her family was extraordinary. The family will receive visitors on Monday, May 3rd, 2021 from 4pm-7pm at Palms West Funeral Home, 110 Business Park Way, Royal Palm Beach. A funeral service will be held on Tuesday, May 4th, 2021 at 12:00 PM at Christ Fellowship Church, 9905 Southern Blvd, Royal Palm Beach with a viewing at 11:30 AM. Immediately following the memorial service, a processional will continue to the burial ceremony at Fernhill Memorial Gardens, 1501 S. Kanner Hwy, Stuart.

Tina M. Slaughter, 56, of Royal Palm Beach, FL, died on April 25, 2021, surrounded by her family after a brief illness. Tina will lovingly be remembered by her husband, Johnny, and by their children, Michael (30), Christopher (20) and Selena... View Obituary & Service Information

The family of Tina M Slaughter created this Life Tributes page to make it easy to share your memories.