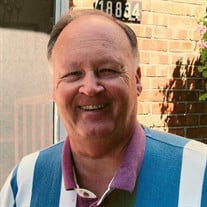 Thomas John Zdrodowski, 80, of West Palm Beach, FL, and formerly from Northville, MI, passed away suddenly on Tuesday, December 29, 2020. He was a loving husband, father, grandfather, brother, uncle, friend and neighbor. His loving spirit and significant presence will be missed by all who knew him. Tom was born on July 4, 1940 in Detroit, MI to John and Irene Zdrodowski. He spent his childhood on the eastside of Detroit living with his parents, grandparents and siblings, Michael and Susan, in a house on Hardyke near Detroit City Airport. He attended St. Thomas the Apostle catholic grade school and had his heart set on attending the University of Detroit Jesuit High School and Academy. After being accepted, he took two buses each way to get to and from school. However, this never deterred him. He graduated in 1958 with honors and was a three-year letterman in baseball. Tom loved his high school experience and the opportunity it afforded him and remained a lifelong Cubbie. He met the love of his life, Patricia Hojnacki, at a party when they were 16. The high school sweethearts married on May 2, 1964 and spent the next 56 years building a life together full of love, respect and adventure. They raised two children, Michael and Michelle, in a house on Alderton on Detroit’s westside where they lived for more than three decades before moving to Northville, MI in 2001. Tom began working at an early age. One of his first jobs was riding the Borden’s Milk Truck with his father, delivering bottles of milk to homes throughout Detroit. He also served as a play leader for the City of Detroit’s Recreation Department while attending college. After graduating from Wayne State University in 1963 with a Bachelor of Science in Business Administration, Tom began what would be a nearly 40-year career using his love of accounting and finance to serve the people of the City of Detroit. The majority of his city tenure was spent in the City’s Finance Department where he served in the Payroll Division, rising through the ranks to become Payroll Manager. In this role, he was responsible for ensuring that all general and uniform City employees were paid properly and on-time. He also assisted in the design of the city’s Payroll/Personnel and new Pension systems. After serving for six years as an elected trustee on the General Retirement System for non-uniform city employees, Tom was promoted to Executive Secretary of the Retirement System of the City of Detroit in 1988, where he oversaw the operations of the General Retirement System, the Policemen and Firemen Retirement System and their $4 billion in investments, as well as the Retired Employees Benefit Plan. He served with distinction in this role until his retirement from the City of Detroit in July 1999. Although retired, Tom did not stay idle. His vast knowledge of the city’s payroll system and its intricacies led to work as a consultant, including for the Wayne County Circuit Court to provide recommendations for improving the efficiency of the City of Detroit Police Department’s Payroll Division. He also worked in investment advisory and investor relations positions at a number of pension consulting firms. Tom was active in a variety of professional associations, including the Michigan Association of Public Retirement Systems, where he served as president from 1991-1993, the National Conference of Public Retirement Systems, the Government Finance Officers Association, and the International Foundation of Employee Benefit Plans. He carried on his passion for baseball throughout his life, playing in numerous softball leagues throughout the city, including at Jayne Field. Tom also used his baseball knowledge as an umpire for recreational league games in the city – using the money he earned to help put his children through catholic school and college. He was also an avid golfer and had a love of horse racing. Never much a lover of Michigan’s winters, after retirement, Tom and Pat spent winters at their home in West Palm Beach, FL, moving south full time in 2018. He is survived by his wife, Pat, his children Michael (Anne) and Michelle, his grandchildren Joshua, Sarah and Noah, and his siblings Michael (Sue) and Susan (Steve), and several nieces and nephews. The family asks that remembrances of Tom be made in the form of a memorial gift to the University of Detroit High School and Academy in Detroit. https://www.uofdjesuit.org/giving/memorial-gifts A memorial service is being planned for a later date in Michigan.

The family of Thomas John Zdrodowski created this Life Tributes page to make it easy to share your memories.