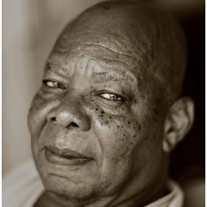 RRoy Alphanso Bates passed away peacefully at home on Tuesday January 11, 2022 surrounded by loved ones. Roy briefly, and courageously, battled cancer. He was 80 years old. Roy was born on August 3, 1941 in St. Thomas, Jamaica. The second oldest of nine children, Roy did not have the opportunity for a formal education but he had a strong entrepreneurial spirit and an aptitude for hard work. At a young age, Roy left his hometown of White Horses and struck out on his own, working various jobs to support his family. His work ethic and desire to care for his family led him to emigrate from Jamaica to the United States in the early 1970s, and settle in New York City. In New York, Roy and his first wife, Fay, opened one of the first Jamaican restaurants in the Bronx. He later became a master mechanic, a skill he learned in Jamaica and later perfected in the U.S. Roy was known as one of the best diesel mechanics at his company, excelling at his field for over two decades. Unfortunately, Roy had to retire early due to a work injury, but this did not dampen his enthusiasm for hard work. After this retirement, Roy relocated with his second wife, Dorothy, to sunny Florida in 1998. Roy often expressed his love for Florida and was fond of saying “Florida is only 90 minutes from Jamaica!” In Florida, Roy continued his entrepreneurial ambitions and started a trucking business. In his later years, the simplest pleasures in life brought him the greatest joy. Roy enjoyed gardening, playing dominoes with friends, watching The Price Is Right and Let’s Make A Deal, spending time with family, sitting in his chair in the open garage enjoying the fresh air, and traveling frequently to Jamaica to spend time with family and friends there. Roy is survived and remembered by his wife, Dorothy; his six children, Karen “Angela” Bates, Cornelius “Wayne” Bates, Neville “Andrew” Bates, Valentina “Charmaine” Bates-Barthlett, Belinda “Nadine” Bates, and Tanesha Bates; four stepchildren, Bernadette James, Alicia Simpson McAfee, Khanelia Manderson, and Roaquiem Manderson; four siblings, Robert Ferguson, Dorothy Ferguson, Pearline Powell, Pastoria Smith; fourteen grandchildren, five great- grandchildren; and many nieces, nephews, cousins, and friends.

RRoy Alphanso Bates passed away peacefully at home on Tuesday January 11, 2022 surrounded by loved ones. Roy briefly, and courageously, battled cancer. He was 80 years old. Roy was born on August 3, 1941 in St. Thomas, Jamaica. The second... View Obituary & Service Information

The family of Roy A. Bates created this Life Tributes page to make it easy to share your memories.

RRoy Alphanso Bates passed away peacefully at home on Tuesday...