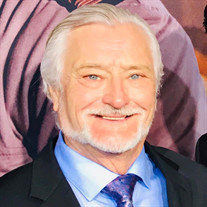 On the eve of the birth of our Savior, Jesus Christ, December 24th, 2019, Roger Allan Kleintank M.D., beloved husband, father, brother and friend flew to the arms of our Heavenly Father. He was surrounded by his loving wife and children as he succumbed to viral pneumonia after a brave and valiant battle. He is remembered by all through his many stories and accounts of “larger than life” experiences. He was born to Alfred Robert and Ruth Grace Kleintank on January 9, 1952 in Hamilton, Ohio, the third of four children and is survived by his brothers, Jerald Kleintank and James Kleintank. He graduated from Badin High School in 1971, then earned his Bachelor of Science degree at the University of Cincinnati in 1975. Roger had a true zest for life and adventure! At the age of 40 he attended the Universidad De Guadalajara Medical School for 2 years, then transferred to Ross Medical School in New York and earned his MD Degree there. As a youngster and teenager, Roger loved football, his German Shepherds, and being with family and friends. Then he met our gorgeous mother, Melody Woodall Kleintank at the tender age of 16. They became high school sweethearts and married in their senior year. Now 49 years later, Melody and Roger are together and have an abiding, everlasting love. That love produced 6 wonderful, successful children; Nathaniel Christian Kleintank (Kate), Sarah Elizabeth Kleintank Curtis (Wayne), Jacob Charles Kleintank Sr, Ruth Grace Kleintank Matuszewski (Paul), Benjamin Edward Kleintank (Bridget), and Luke Richard Kleintank. Roger’s life was full of wonderful accomplishments and adventures, but he always told everyone that the most precious part of his life were his children and grandchildren. He put his family above all else, lovingly demanding that each member do the same. This closeness now lives on through his six children and his ten grandchildren. The grandchildren are Melody Rose Kleintank (15), Jacob Charles Kleintank Jr (13), Bella Grace Curtis (13), Scarlett Dawn Curtis (10), Joshua Andrew Kleintank (9), Ilyana Rebecca Curtis (7), Charlotte Evelyn Kleintank (6), Aria Merciella Kleintank (3), Grant Edward Matuszewski (1), and Eva Marie Kleintank (1). No words could ever express the deep love Roger Kleintank had for his wife, children, and grandchildren. He will be tenderly remembered, sorely missed, and never ever forgotten

On the eve of the birth of our Savior, Jesus Christ, December 24th, 2019, Roger Allan Kleintank M.D., beloved husband, father, brother and friend flew to the arms of our Heavenly Father. He was surrounded by his loving wife and children as he... View Obituary & Service Information

The family of Roger Allan Kleintank created this Life Tributes page to make it easy to share your memories.

On the eve of the birth of our Savior, Jesus Christ, December...