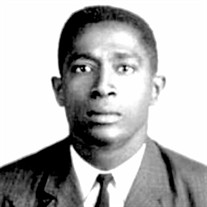 Roderick Nicholas Alfred Loney, 93, of West Palm Beach Florida, recently passed away after succumbing to a battle with COVID-19. Roderick was born in San Fernando, Trinidad West Indies on April 6, 1928 to Alfred Eugene “Paddy” Loney and Lillian “Sissy” Loney. The second of ten children, Roderick’s leadership and care for others was honed in his home as the one who significantly assisted in the tending of his 8 younger siblings. Shortly after his graduation from Naparima Boys College, he accepted Jesus as his Savior and Lord, devoting his life to the pursuit of knowing Christ and making Him known to others. He taught elementary school for a short time before marrying Sylvia Thompson, his wife of 70 years. Roderick was ambitious and determined to get to America to be trained in Bible doctrine and theology. In June 1955, Roderick traveled to America to attend Moody Bible Institute (MBI), sending for Sylvia six months later. Roderick and Sylvia attended MBI together and, subsequently, Wheaton College, graduating together with their BA degrees. Roderick continued at Wheaton College for the completion of his MA in Near Eastern Studies and Biblical Archeology. Upon graduation, they moved to NYC where Roderick completed his doctorate in Education Administration at Columbia University. Roderick then chose to accept a leadership position at the newly founded Medgar Evers College of the City University of New York. He was a bi-vocational pastor, pastoring the Baptist International Missions in Harlem, NY while at Medgar Ever College. He was a visionary and a man of ideas. He would see a need and develop programs and organizations to address that need, with one constant theme: To return to Trinidad and give back to the Coffee community and to the nation. Following the death of his second son, Kestor, he retired from Medgar Evers College and departed for Trinidad, becoming the pastor of Beth’ aleel Fundamental Baptist Church shortly after his arrival. Located in the Coffee, this was the same church which sponsored his immigration to America decades earlier. He remained pastor of Beth’ aleel until 2021. Roderick was a force of nature who commanded a room, a space, and an organization upon entry. He ministered to thousands of people, both in the University system and through his pastorate and his counseling ministries in the United States and in Trinidad. He was unendingly proud of all five of his children Rod (Ronny) Loney, Arlene Loney-Whiteman, Debi Loney-Brown, Kestor Loney and Caryl Loney-McFarlane, and all five of his grandsons, David Whiteman, Timothy McFarlane, Kestor Brown, Joseph McFarlane and Caleb Brown and his one great-grandson, David (Junior) Whiteman. He consistently provided advice, wise counsel and Biblical guidance on every occasion. He was deeply loved and will be sorely missed. Roderick was predeceased by his brothers Gilroy Loney, Cecil Loney, Hollis Loney and Wilfred Loney as well as both his sons, Kestor Loney and Rod (Ronny) Loney. He is survived by his beloved wife, Sylvia Loney, his daughters Arlene, Debi and Caryl, his grandsons David, Timothy, Kestor, Joseph and Caleb, his great grandson, David (Junior), two brothers- Christie and Rawle, three sisters- Letitia, Betty and Marjorie and a host of nieces, nephews and cousins.

The family of Roderick N.A. Loney created this Life Tributes page to make it easy to share your memories.