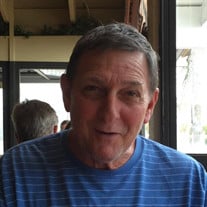 Robert Henry White was a loving husband, father, grandfather, brother, and friend to all those who knew and loved him. He left this earthly life for his eternal resting place on February 11, 2021 at age 67. Born in Worcester, Massachusetts on December 26, 1953 to Robert and Evelyn White, who have preceded Bob in death, he is the youngest of three surviving siblings. Raymond, Janet, and Jeanne, whom along with their spouses, respectively Suzanne and Jerry, along with numerous nieces and nephews, mourn Bob’s passing. After leaving Worcester as a young boy his family settled in Palm Springs, Florida where he attended St. Luke Catholic School, before transferring and graduating from John I Leonard High School. As a young man Bob began work with AT&T, formerly Southern Bell. Even after working long hours in sweltering heat and humidity, he never faltered, offering a hand to help a friend, an ear to listen, or a joke to turn a smile. A marriage lasting until death do us part, Bob was married to Yvonne Patterson in February 1975, an unbroken bond lasting 46 years. A husband and father, Bob with Yvonne put down roots in the Acreage, an unincorporated area outside Royal Palm Beach, Florida. There the family began to blossom, survived by son David, daughters Adrienne and Michelle, their spouses respectively, Darelle, Matt and Tim. The family Bob began so many years ago now remembers him through the smiles and laughter of seven loving grandchildren: Brayden, Landon, Lily, Peyton, TJ, Nathan, and Noah. A devout Catholic, he was a parishioner at Our Lady Queen of the Apostles Catholic Church offering much to God by way of his time, talent, and treasure. A rock and corner stone to his family, Bob epitomized the role of a husband and father as a faithful servant to Christ; loving unconditionally he led by both words and deeds until his Heavenly Father called him home to take his place in God’s Kingdom. In lieu of flowers, the family requests a donation be made in Bob’s name to Our Lady Queen of the Apostles Catholic Church, 100 Crestwood Blvd S, Royal Palm Beach, FL 33411.

Robert Henry White was a loving husband, father, grandfather, brother, and friend to all those who knew and loved him. He left this earthly life for his eternal resting place on February 11, 2021 at age 67. Born in Worcester, Massachusetts on... View Obituary & Service Information