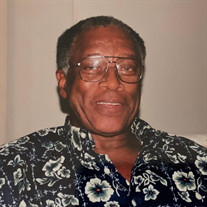 Robert James Magee, Jr., known to his friends and family as "Robert" and to his grandchildren as “Opa”, was born on October 18, 1935 to parents Robert Magee, Sr. and Vanda Watson in New Orleans, LA. Robert grew up in Franklinton, LA with his siblings Ruby Ballard, May Ella Barnes, and Alex Harrison, Jr. (who preceded Robert in death on April 13, 2016). After graduating from Washington Parish High School, Robert continued his education at Southern University and at the Louisiana Technical/Trade School. Robert honorably served his country in the United States Army for two years beginning in 1959. He completed his training at Ft. Raleigh, Kansas and was eventually stationed in Munich, Germany. While in Germany, Robert met and fell in love with Brunhilde Lobenstock (better known as Bruny), in August, 1959, and the two were united in holy matrimony on May 5, 1961 in Munich. The couple was blessed with their first two children while living in Germany: their son, Michael (who preceded Robert in death on June 16, 1962) and their daughter, Cynthia (Magee) Alexandre. In March of 1964, Robert and his young family traveled by steamship from Hamburg, Germany and returned to the States, bound for San Francisco, CA. However, during a stop in Cleveland, OH, Robert learned of an opportunity at J&L Steel. This eventually led to a 31-year career with J&L/LTV Steel, during which time Robert also established his own roofing company. While in Cleveland, Robert and Bruny were blessed with the birth of another daughter, Carmen (Magee) Williams. Robert and Bruny lived and flourished in the greater Cleveland area until October 1995, when they retired to South Florida. After a long battle with health challenges, Robert departed this life (age 84) on January 2, 2020. Those left to cherish his memory are Bruny, his loving and devoted wife of over 58 years; two daughters Cynthia and Carmen; four beloved grandchildren, Gabrielle Williams, Dominic Alexandre, Christopher Alexandre, and Ira Williams IV; sons-in-law, Ira Williams, III and Alex Alexandre, in addition to a host of other dear relatives and friends.

Robert James Magee, Jr., known to his friends and family as "Robert" and to his grandchildren as &#8220;Opa&#8221;, was born on October 18, 1935 to parents Robert Magee, Sr. and Vanda Watson in New Orleans, LA. Robert grew up in Franklinton,... View Obituary & Service Information

The family of Robert James Magee Jr. created this Life Tributes page to make it easy to share your memories.

Robert James Magee, Jr., known to his friends and family as &quot;Robert&quot;...