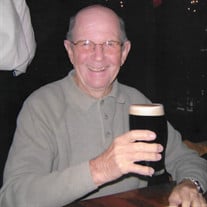 Robert A. Kaye entered eternal peace on January 16th after a long and courageous battle with Alzheimer’s Disease. Robert was born in Jamaica, New York on November 9, 1931 to the late Arthur & Mary (Hanlon) Kaye. Robert was preceded in death by his siblings: Virginia (Armstrong), Regina (Bracci), Donald and Edmond. Robert was happily married to “his bride” Connie (Coppola) for 63 years. He was preceded in death by his beloved son Arthur (1998) and leaves behind a cherished son John (Deborah) of Minnesota, and his “baby” Mary Wikowitz (Robert Michael) of Virginia. Robert leaves behind 7 treasured grandchildren: Robert (Corinne), Jocelyn, Ashley, Arthur (Tory), Michaela, Robert Matthew (Shelby), Kristen (Darren) and 4 great grandchildren: Arthur, Farrah, Jackson, and Payton along with countless nieces and nephews. Robert was a Sergeant in the United States Air Force from 1950-1954 during the Korean War. His military career took him throughout the United States as well as Hickam Field, Hawaii. It was his military career where he first began a life-long love affair with aviation by being an instructor in the field of Aviation Maintenance. Once honorably discharged from the military, his civilian career led him to Eastern Airlines at New York’s Kennedy and LaGuardia Airports where he worked for 36 years. His aviation career then took him to Florida where he was the Maintenance Supervisor for the Palm Beach International Airport for 10 years. “Bob’s” legacy as a leader and master aircraft technician will undoubtedly live on. In conjunction with his admired career, Robert was devoted to his wife and children. The family enjoyed boating and fishing on The Great South Bay. They also treasured their yearly, unforgettable summer vacations with relatives up in the Catskill Mountains. Robert and his son John shared several memorable fishing trips to Alaska. Robert also valued his time working as a leader in his son’s Boy Scout Troop # 343 of Hauppauge, New York. Following his retirement, he and Connie finally took some much-deserved time to focus on themselves. They traveled extensively around the globe to many destinations including: China, Italy, Switzerland, Australia, and Ireland. Throughout his life, Robert was known as a “Fix it Man” to anything that needed repair. He intuitively took the initiative to help wherever there was a need. He took great pride in sharing and utilizing his assortment of cherished tools to help in whatever capacity needed. His hobbies included wood working, furniture building, stained glass, as well as golf and reading. His love of sharing a “cold beer” also brought him much joy. Robert was a friend to all and strived to always work hard to do the right thing. His witty way included unforgettable limericks and slogans that produced smiles and laughs. “Today is the day you worried about yesterday.” In lieu of flowers, memorial donations may be made to the Alzheimer’s Association in Robert A. Kaye’s memory at: act.alz.org/donate.

Robert A. Kaye entered eternal peace on January 16th after a long and courageous battle with Alzheimer&#8217;s Disease. Robert was born in Jamaica, New York on November 9, 1931 to the late Arthur & Mary (Hanlon) Kaye. Robert was preceded in... View Obituary & Service Information

The family of Robert A. Kaye created this Life Tributes page to make it easy to share your memories.

Robert A. Kaye entered eternal peace on January 16th after a...