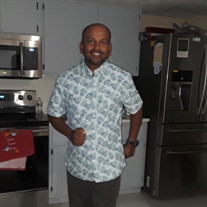 Robert Joseph Harricharan, 51, passed away unexpectedly along with the family dog, Snuggles, on Saturday, May 30, 2020 in West Palm Beach, FL. He is survived by his wife, Paro, and his two stepdaughters, Elizabeth and Pamela; his siblings, Julie and Cherry-Ann and six brothers, Anthony, Bernard, Richard, Clarance, Darryl and Nicholas; his nephews and nieces, Garvin, Jenna, Naresh, Cristal, Stefan, Haivel Ann, Cody, Josh, Josiah, Nickela, Christopher and Xavi Jayden; and sister in laws Sandra, Ann, Hero, Seema, Crystal, and Sally. He is predeceased by his father, Basdeo; his mother Elesia; and brother in law, Ganesh. Robert was born in Mt. Dor, Champ Fleurs, Trinidad and Tobago on May 13, 1969 to Basdeo and Elesia Harricharan. He grew up in a Roman Catholic home amongst his 8 siblings, Robert being the 6th. He was known as the extremely playful, mischievous and spoiled of the siblings. He attended St. Augustine Secondary School and his first job was at a grocery store. His passion for automotive started when he got his first car, a Ford Escort, and learning mechanics from his dad. Robert soon became an entrepreneur by opening his own transportation service of flat bed trunks, following in his father’s footstep. In Robert’s leisure time he loved fishing, camping and going to the beach. Robert came to the United States in 2001 and first settled in New York. While living in Long Island, New York, Robert worked as a General Manager at a banquet hall as well as a Sign Installer. In 2007, Robert met Paro and on November 16th 2009 they got married. Together they loved to go for long drives, try their luck at the casino and liked gardening, to name a few. They then moved from Floral Park, New York to Royal Palm Beach, Florida in October 2015. While living in Florida, Robert worked as a Facility Attendant for the Village of Royal Palm Beach and as a Heavy Equipment Operator for Indian Trail Improvement District; as well on the weekend as a mechanic with his brother in law. In his spare time, Robert enjoyed spending time with his family by telling stories and jokes, and of course, going on adventures with his buddy Snuggles. Robert loved to eat popcorn, nuts, pork, brown chicken with rice and red beans, and always dhal with his curry. He essentially was a wise craftsmen and never hesitated to graciously help others with that infectious smile of his. He will be deeply missed by his family, friends and all who knew him young and old. John 3:16 For God so loved the world, that he gave his only begotten Son, that whosoever believeth in him should not perish, but have everlasting life. Visitation will be held at 7:00m, on Friday, June 5th, at Palm West Funeral Home, 110 Business Way, Royal Palm Beach, FL 33411. Funeral service will be held at 10am, on Saturday, June 6th, at Palm West Funeral Home, 110 Business Way, Royal Palm Beach, FL 33411, followed by cremation.

Robert Joseph Harricharan, 51, passed away unexpectedly along with the family dog, Snuggles, on Saturday, May 30, 2020 in West Palm Beach, FL. He is survived by his wife, Paro, and his two stepdaughters, Elizabeth and Pamela; his siblings, Julie... View Obituary & Service Information

The family of Robert Joseph Harricharan created this Life Tributes page to make it easy to share your memories.