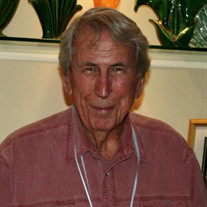 Robert Lawrence Edens passed peacefully Sunday morning, May 3,2020 at his home in Wellington Florida. Born in Batesburg, South Carolina on July 10, 1928 to Earl Phillip “Bob” Edens and Edna Earl Lee. Robert graduated from Belle Glade High School in 1947 and in his own words “graduated with just a happy C average”. Robert married the love of his life, Mary Margaret Maloy on February 3, 1950 in Belle Glade, Florida where they lived until 1996 when they relocated to Wellington, Florida. Robert served in the United States Marine Corps from 1952 - 1954. After graduation from Boot Camp at Parrish Island South Carolina, he served the remainder of his active duty as an Instructor in the Engineering School Battalion at Camp Lejeune, North Carolina. In January 1954 he was released from active duty as a Buck Sergeant. Robert served inactive duty from 1954 to 1960 until he was Honorably discharged. In December of 1956 Robert started Edens Dragline Service providing drainage solutions to local farmers through ditches and pump station construction, which later became Edens Construction Company Inc. In 1970 the business moved from Belle Glade to South Bay, Florida and in 1971 he became a State Certified General Contractor. Robert was ahead of his time with his utilization of technology and engineering software that enabled him to design Agricultural pump stations throughout South Florida. After 40 years in the construction business he retired and sold his controlling stock to family. Because of his innovative business approach, Robert’s business is still thriving and owned by his grandson (3rd Generation). Robert was a skilled marksman and enjoyed both practice and competitive trap and bench rest shooting. Through his shooting he developed lasting friendships. Robert leaves behind three daughters, Brenda Tyson (Benton), Pamela McAllister, Tracy Basore (Steve Royal) and seven grandchildren, Brandie Fernandez (John), Jeremy Crawford (Annie), Jessica Peterson (Darrell), Joshua Crawford (Stephanie), Tobin Basore, Robert Basore (Anzhela) and Zachary Royal. In addition, Robert was very proud to share that he had 10 great grandchildren. Robert is preceded in death by his parents, his brother Kenneth Edens and in 2012 his bride to Alzheimers. Robert will be laid to rest beside his wife at South Florida National Cemetery. A celebration of life will be held at a later date. In lieu of flowers, donations can be made to Alzheimer’s Association in Honor of his wife Mary.

The family of Robert Lawrence Edens created this Life Tributes page to make it easy to share your memories.