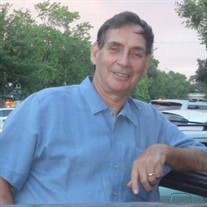 Robert Drescher was born in Freeport, Long Island, NY, April 27, 1943. He was pre-deceased by his parents, Kathleen Patricia (nee: O'Sullivan) Joseph William Drescher, and his brother Joseph Gerard. He leaves behind his loving wife, Victoria, beautiful daughter, Pamela Gene, his sister-in-laws, Conny Drescher and Linda Levy, Brother-in-law, Peter Levy, late brother-in-law, Larry Levy, Mother-in-law, Phyllis Levy, Father-in-law, Archie Baker, nieces, Leslie Drescher and Lauren Levy, Nephews, Joseph Drescher, Kyle, and Eric Levy. Bob lived a very colorful life in his younger years and gave his folks a run for their money. He lived a few lifetimes and miraculously survived to tell the tales. He began his working career as an iron worker for Local 40 and helped build the World Trade Center, hung cables on the Verazzano Bridge in Brooklyn, NY as well as other locales around NY and Michigan. He then discovered "The Hamptons" on Eastern LI with some friends from Freeport and went into the restaurant/club business. He was partners at the Post Stop in Westhampton and The Oliver Twist Inn (OTI), formerly The Beach Bar in Hampton Bays. While at The OTI, the story goes, the whole staff left for Woodstock in Bethel, , NY. Being the dedicated worker that he was, he didn't go, and he threatened them that they wouldn't have jobs left if they went...oh, well, so much for that! He eventually bought out some partners and operated a pub/tavern in Hampton Bays, NY for 35 years called, Charlie Browns, aka: CB's Bar & Grill. At the time, he could not afford to run it, and pay for a place to live, so he lived upstairs in the Pub. He cut trees during the day and would clean up after work showering in the basement and then open the bar for business. Bob was an extremely hard worker and never complained about going to work. He made many friends through the years at the bar, and outside in a fellowship, called AA. He stopped drinking while living at the bar and remained sober for 35 years. His committment to AA, helped him survive a dangerous spiral and create a healthy and love for life that he hadn't envisioned years past. He married Vicki and by that time was "really" ready to be married. The third time is the charm as they say and they had a beautiful baby girl that completed his journey for a healthy and happy life. He was a dedicated husband, father and friend and businessman. He said what he meant, and meant what he said. No holds barred. He had a backbone of steel, symbolic of being an iron worker at heart. He built a life, with strength, determination and hard work. He loved spending time with his family, cousins, and friends. He loved to play Texas Hold'em and think of ways to make "moolah". He was our miracle man. He was not judgemental and was loved by all who knew him. We enjoyed our family life together. Bob finally retired in 2015 and the family picked up and relocated to Lake Worth, Fl. Bob loved it there, made some new friends and had a few good years before illness struck. He fought the good fight and will be forever in our hearts. In lieu of flowers, please make donations to: Smile Train PO Box 96231 Washington, D.C. 20090-6231 St. Judes Children's Research Hospital 501 St. Jude Place • Memphis, TN 38105

The family of Robert Drescher created this Life Tributes page to make it easy to share your memories.