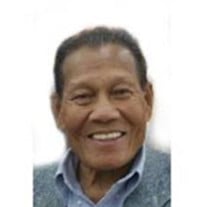 Dr. Rizal Reyes Delgado passed away peacefully on Christmas Eve, 2021, at his Wellington, Florida home, surrounded by loved ones. He was 94. He is preceded in death by his siblings: Nicolas, Feliciano, Ligaya, Aguinaldo, and Independencia. Dr. Delgado was born to parents Paterno and Felicisima (Reyes) Delgado on October 3, 1927, in barrio Bayang, Province of Aklan, Philippines. During World War II, he served in the Popular Resistance against the Japanese Occupation when he was 16 years old. After the war, he moved to Manila where he studied at Santo Tomas University, then earned his medical degree at Far Eastern University, becoming the first doctor to come from his tiny island barrio. Dr. Delgado left the Philippines to intern at St. Joseph’s Hospital in Yonkers, New York. There, he met the love of his life, a pretty nurse named Norma Iris Ramos. They married on October 24, 1960, and moved to Buffalo, New York, where he completed his residencies in both internal medicine and psychiatry. Later, the couple relocated to raise a family in Binghamton, New York, where Dr. Delgado assumed a key position at the Binghamton Psychiatric Center. During his tenure, he was active in the community as a member of the Kiwanis and Lions clubs. He enjoyed a well-deserved reputation as an avid fisherman, a first class cook, and a green thumb gardener. He was a competitive bowler and a low handicap golfer with a lifetime record of no less than six holes-in-one. No matter what game he played, his name inexplicably-evolved from “Riz” to “Pete,” though nobody was quite sure why. He roared around town in a flashy Cadillac Eldorado. He fancied himself to be a world class dancer. His Filipino accent often made his phone calls undecipherable. And he was a crafty card shark capable of playing nine straight hours of gin rummy with only two bathroom breaks. He was the stuff that quirky Local Legends are made of. Dr. Delgado joined the Veterans Administration Medical Center, moving the family, first to Tuskegee, Alabama, and then on to Wilkes-Barre, Pennsylvania, where he practiced until retirement. Due to his strong work ethic and his devotion to helping people, he was soon back at work at the Clarks Summit State Hospital in Pennsylvania. In 1998, Dr. Delgado tried to retire once more in West Palm Beach, Florida, but his love of medicine again found him joining locum tenens in various locations around the United States. In-between out-of-town assignments, he led a simple family life, planting a legacy of tropical fruit trees and plants in Loxahatchee, Florida, some of which included mangos, papayas, coconuts, jackfruit, bananas, and pineapples. Dr. Delgado was a firm believer in the value of education; the more the better. He sent many nephews and nieces to college, establishing his own personal foundation for those in need. He also sent thousands of books to the schools in Bayang. Likewise, he was generous with his siblings and friends whenever they needed a helping hand. In addition to his service as a guerrilla fighter in World War II, Dr. Delgado was a veteran of the Persian Gulf War serving as a Lieutenant Colonel in the U.S. Army; ironically under the command of his daughter, Captain Liza Delgado. He will receive full military honors in a private ceremony at the South Florida National Cemetery. He is survived by his wife, Norma…his children Annette, Liza (spouse Gayle), Linda (spouse Len), and David…grandchildren Matthew, Austin, Nicolas, and Dawson…as well as many relatives from his native home and close friends whom he considered to be family. A virtual Catholic Mass for Dr. Delgado is scheduled for Sunday, January 2, 2022, at 7 pm (EST)…4 pm (PST)…Monday 8 am (Manila time). Father Ramon Merino will celebrate the Mass at San Felipe De Neri Church, Mandaluyong. In addition, the Family will establish an eternal Rizal R. Delgado Memorial Park and Library in his home barrio of Bayang, Aklan Province. It will be located near a marble memorial which Dr. Delgado donated to honor a group of fourteen local men executed by Japanese soldiers in 1942. In lieu of flowers, donations can be made to Hospice of Palm Beach County Hospice by the Sea Trustbridge: https://trustbridge.com/donate-now

Dr. Rizal Reyes Delgado passed away peacefully on Christmas Eve, 2021, at his Wellington, Florida home, surrounded by loved ones. He was 94. He is preceded in death by his siblings: Nicolas, Feliciano, Ligaya, Aguinaldo, and Independencia. Dr.... View Obituary & Service Information

The family of Rizal Delgado created this Life Tributes page to make it easy to share your memories.