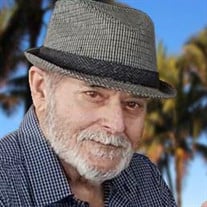 Richard Wiley Haynes of Lake Worth, Florida age 81 passed away on Monday, September 6th, 2021. Richard was born in Lake Worth, Florida to Juanita and Wiley Haynes and is survived by his wife Rita Sailler Haynes and by his brother Eugene Madison Haynes of West Palm Beach, Florida, Sister Martha Lou Haynes Bell of Savanna, Ga. and his children Tera Jennings, Kathrine Jones (Enrico), Richard A. Haynes (Deanna), Stepchildren Lisa Zeoli, June Vickers, and Jessica Athenas. He leaves behind numerous grandchildren and great grandchildren. He was a graduate of Lake Worth High School Class of ‘59 and active member with the Alumni. After graduation, he joined the U.S. Navy and went on the Westpac tour for two years on the U.S.S. Jason. After his tour he came back to Lake Worth and started his family, and began working for The Pratt and Whitney Company as an Artist in the early 1960’s. After a few years he joined his father and brother in the family business at Haynes Painting and Decorating throughout the 1970’s and was the previous president of the Painting Decorating Contractors of America. In the early 1980’s, he worked as a freelance artist in Palm Beach working on many noteworthy residences including The Ford Estate, Gillette Estate, Post Estate, Mar-a- Lago and many more with his restoration and artwork skills. Richard was working on the Post Estate when Donald Trump purchased it in 1994 and was hired by Mr. Trump as his Resident Artist to do the full restoration of the Mar-a-Lago Estate where he spent over 10 years gold leafing and restoring the hand painted murals and artwork throughout the estate. Richard did this all while working closely with Mr. Trump designing the Trump International and Mar-a-Lago crests that are now used around the globe. Richard was an outgoing, caring person with an enormous heart spending every day making people laugh and smile, while bringing out the best in them and always leaving everyone with a smile and a fond memory of him. Richard played an active role in this children’s school activities spending many nights and weekends designing and building sets and floats for many functions at John I. Leonard High School, Lake Worth High School, Thomas Dance Studio of Lake Worth recital props and set designs. He spent endless hours working for various charity organizations such as Kiwanis Club, Lions Club, Shriners Club volunteering his skills at numerous events. His love of photography changed from being a hobby to another creative outlet and blossomed into an added business adventure for him, allowing him to express his creativity doing photo shoots for many of the Palm Beach residence and more. He spent many summers on Lake Nottely in Blairsville, Georgia where the family built their summer cabin in the 1940’s, making lifelong friends along the way. A Celebration of Life will be Held at the Lake Worth Beach Club Located at One 7th Avenue North, Lake Worth, on Saturday, October 16th at 6pm In leu of flowers donations may be made in his memory to: Alzheimer’s Association at ALZ.ORG Lake Worth Alumni Foundation at LWHSALUMNI.ORG

The family of Richard W Haynes created this Life Tributes page to make it easy to share your memories.

Richard Wiley Haynes
of Lake Worth, Florida age 81 passed away...