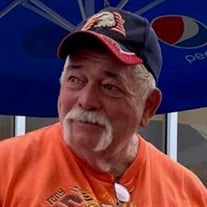 Richard Kenneth Eldred December 10, 1953- December 11, 2021 Richard (Rick) of Jupiter, Florida passed away on December 11, 2021. Rick was born in Norwich, New York to parents Kenneth and Elsie Eldred and was the first of four children. He moved to Fort Lauderdale, Florida at the age of 2 and has been a Floridian ever since. Rick played football for Plantation High School and graduated in 1971. After high school he worked construction and received his general contractor license. He lived several years in Margate, Florida with his first wife Susan where they had 3 children Brent, Karin and Brandon. He then built a home for the family in Homeland (Lake Worth, Fl) and many happy years were spent there. In 2000 he moved to Jupiter Farms where he was an active and proud member of The Elks. Rick was a General Contractor and was co-owner J&R Eldred Construction with his brother Jim. Rick and Jim are not only brothers but co -workers and friends. When not at the job site Rick loved to go to “his office” the Jupiter Inlet to watch the boats go by. He loved to fish and go boating with his friends and family and riding his Harley. For many years he did an annual hunting trip with his dad and brothers to New York where they were surrounded with cousins, uncles and friends. He was a big Miami Dolphin’s fan and for many years had season tickets. He also enjoyed camping, going to the races and spending time with his kids and grandkids. Rick will best be remembered by his generosity, sense of humor and love of having fun. Rick was a devoted son, father, brother and friend. He was preceded in death by his father Kenneth Eldred. He is survived by his mother Elsie Eldred, sons Brent and Brandon Eldred, daughter Karin Izquierdo (Nick), brothers James (Cindy) and Steven Eldred, sister Kristine Gerchar (George Kantor). Grandchildren Jacob, Nicholas, Nathan and Charlotte, niece Amanda Reiter (Mike), nephews Dereck Eldred (Stacy) and Brad Eldred (Cindy) and great nieces Avery, Madison, Kensy, Ava, Cecelia and Elsie, extended family and many, many friends. In lieu of flowers the family suggests a donation to St. Judes Research Hospital or Tunnel to Towers Foundation

Richard Kenneth Eldred December 10, 1953- December 11, 2021 Richard (Rick) of Jupiter, Florida passed away on December 11, 2021. Rick was born in Norwich, New York to parents Kenneth and Elsie Eldred and was the first of four children. He... View Obituary & Service Information

The family of Richard Kenneth Eldred created this Life Tributes page to make it easy to share your memories.