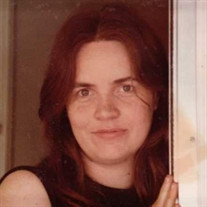 Peggy Ann Schmidt, 75, of Wellington, Florida, passed away, with her family by her side, after a prolonged illness, on March 22, 2022, at home in Wellington, FL. She is now resting in the arms of our Lord and Savior. She was born on November 21st, 1946, in Dry Fork, Virginia to Joe C. Davis and Gladys Davis, who preceded her in death. She graduated Grundy High School in 1965, and moved to Oklahoma City, Oklahoma to be with her sisters, Linda Eisenbraun and Dina Holland. While there, she met her husband, John F. Schmidt of Fort Lauderdale, Florida as he was attending graduate studies, from Florida State University. Peggy and John were married in 1967 and had three children, John, Gina, and Geoff. Peggy began working at Island Creek Coal Company, Keene Mountain, VA in the 1970’s in a secretarial position and transferred with her family to corporate headquarters in Lexington, Kentucky. She worked for several more years and retired in the 1980’s, to focus on her family. Settling in Wellington, Florida, in the late 90’s, she and John became the fulltime care-givers for her mother-in-law, Jeannie T. Schmidt until her death in 2011. She loved the Lord, Jesus Christ and devoted much of her life to serving others. She was a member of Boca Raton Bible Chapel. During her husbands many ministries throughout his lifetime, she supported him faithfully. Peggy was passionate, but humble about her relationship with God and put the Lord first in her life, as a devoted wife and mother. Her life could be summed up in one of her favorite sayings and commandments of the Lord, “Do unto others, as you would have done unto you” Matthew 7:12. She lived by the “Golden Rule” all of her life. She dearly loved her family and friends and was actively, but quietly serving others, whether at church, in her home, or wherever she was. Those who knew her would often hear her say, “Can I get you anything,” or “would you like something to eat?” Peggy was an awesome Appalachian cook and those who tasted her delicious recipes, wouldn’t hesitate to go back for seconds or thirds! She had a servants heart and loved people. She also loved playing “Text Twist” and having coffee, with whoever wished to join her. She was GREAT at it and regularly scored in the millions. She was preceded in death by her Husband and best friend of 51 years, John F. Schmidt, her parents, Joe and Gladys Davis, and Her brother Joe Charles Davis and her son-in-law, Steve Hollingworth. She is survived by her Son, John M. Schmidt (Lailanie); North Ridgeville, OH; Daughter, Gina Hollingworth, Waynesburg, PA, and Son; Geoff Schmidt (Kristen), Tucson, AZ. Grandchildren: Hannah E. Hollingworth, Jacob P. Hollingworth, Joseph F. C. Schmidt and Alexandra I. Schmidt. Brother, Sam Davis (Mary Martha), sisters Linda Eisenbraun, Dina Holland (Don), Patricia Felt, and Pamela Browning (Rick). And many beloved nieces and nephews and great nieces and nephews, and many close friends who are family, as well. A celebration of Peggy’s life will be held at Palms West Funeral Home, 110 Business Parkway, Royal Palm Beach, FL. 33407, on Sunday, April 3rd, between 3 PM - 5 PM, Funeral immediately following. Wake will be held immediately after funeral at: Meadowland Cove, Clubhouse 12784 Meadow Breeze Dr., Wellington, FL 33414 Gated community; See John M Schmidt, Gina Hollingworth, or Geoff Schmidt for code to enter.

Peggy Ann Schmidt, 75, of Wellington, Florida, passed away, with her family by her side, after a prolonged illness, on March 22, 2022, at home in Wellington, FL. She is now resting in the arms of our Lord and Savior. She was born on November... View Obituary & Service Information

The family of Peggy Ann Schmidt created this Life Tributes page to make it easy to share your memories.

Peggy Ann Schmidt, 75, of Wellington, Florida, passed away, with...