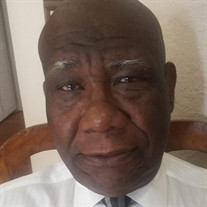 Paul Harkinson Gilroy was born on December 22, 1941 in Kingston, Jamaica. He was the 5th child born to Lola Barckley and Aardon Gilroy. In his early 20's he got his start in finance while working as an auditor for the Hanna company, a job which would get Paul on track for his future career. Immigrating from Jamaica to America in 1968, Paul was determined to be successful in his new home, all while helping other family members migrate to the U.S. He married Novelette Joy Smellie on April 12, 1969 and started his family, having his first born, Tasha DonnaMarie in 1971. Not resting on his laurels, Paul worked full time during the day, providing for his family while attending school at night. He earned his bachelor's degree from Baruch University in 1976 and was able to purchase his first home in Massapequa, NY the same year. The decade ended with the birth of his second child, Jay Paul in 1979. Always a man with a plan and a strong will to achieve, Paul went on to earn his master's degree from St. John’s University in 1980. After achieving his educational goals, he began a highly successful career with the U.S. Federal Government as an IRS Auditor from which he retired after 23 years of service. He was a passionate spectator of every sport, but he had a different level of fan love for Football. If you attempted to visit or call him on a Sunday or Monday evening during football season, you were subject to a “tongue lashing” or a “Whey yu a call call mi phone fa!” There was no justice served for interrupting his game time. He also collected Cricket balls and would make it a point to catch a Cricket match on his many trips back to Jamaica. Loved a game of dominoes especially if he could play and have “a taste” at any party or hangout with his friends. He was generous with his time, giving council and advise wherever he could help. If he wasn’t making rum punch, he was sending out mangos or Easter bun to his crew. But he was most known for being the go-to Tax Man; helping all of us get our “stuff straight” with Uncle Sam. Paul is survived by his former wife Joy, his daughter Tasha, his son Jay, his grandson Ty, his great-grandchildren, Miles and Maxwell along with his siblings, Mavis, Gloria, Marcia, Trevor, many nieces, nephews, in-laws and close friends.

Paul Harkinson Gilroy was born on December 22, 1941 in Kingston, Jamaica. He was the 5th child born to Lola Barckley and Aardon Gilroy. In his early 20's he got his start in finance while working as an auditor for the Hanna company, a job which... View Obituary & Service Information

The family of Paul H. Gilroy created this Life Tributes page to make it easy to share your memories.