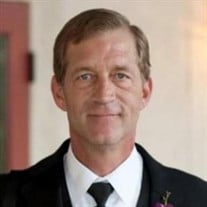 Patrick J. O’Brien (P.J.), 60, of Henry’s Bend, Pennsylvania, formerly of Austin, Texas, died on Thursday, February 4, 2021 at Palms West Hospital in West Palm Beach, Florida. He was born on November 5, 1960 in Oil City, Pennsylvania. He was the son of the late Nancy Jane Stubler O’Brien and Francis P. O’Brien, Jr, who survives. Patrick graduated from Venango Christian High School. He became a Staff Sergeant in the United States Air Force serving at Lowry Air Force Base in Colorado and Bergstrom Air Force Base in Austin, Texas. He studied Microwave Engineering Equipment at Community College of the United States Air Force. He obtained an Electronic Engineering Graphics Degree at Austin Community College. He worked at Motorola as an Electrical/Mechanical Engineer and then for Advanced Micro Devices (AMD) in Austin, Texas where he made his home for many years. Patrick was able to fulfill his lifelong dream of returning home to Henry’s Bend to live in 2007. Patrick was devoted to and loved by his family and many close friends. He could start a conversation with anyone and make someone feel like a longtime friend when they first met. Patrick was extremely proud of both of his children and grandchildren and would speak of them often. He was an avid outdoorsman and enjoyed hunting. His knowledge about fishing and hunting was vast; if you needed to find the perfect fishing hole or lure he was the one to ask. He had incredible talent at tying flies, painting the perfect lure with exceptional detail, and building custom fishing rods for his kids. He was a skilled aquarist and raised many angelfish, cichlids, and discus over his life. Patrick was a competitive fisherman, fishing in multiple bass tournaments throughout the state of Texas as well as a successful fishing charter guide. He was at home on the water and loved fishing on Lake Travis and the Allegheny River. He especially enjoyed his time fishing with his children and most recently was able to pass this joy of fishing onto his grandson Liam during a recent visit to Texas. Patrick was married June 20, 1992, to Marlene K. Jackson who survives. In addition to his wife, Patrick is survived by his two children, Dr. Erica O’Brien and husband Brian of Georgetown, Texas, and Sean O’Brien of Austin, Texas. Patrick was also blessed with two beautiful grandchildren, Liam and Willa Lawrence. Patrick is also survived by his siblings: Michael O’Brien, Timothy O’Brien and wife Pamela of Woolwich, ME, Daniel O’Brien and wife Beth of Franklin, PA, Erin Herman and husband Jason of Oil City, PA, Colleen Stevenson and husband Michael of Cooperstown, PA. His sister-in-laws: Carrie of Fertigs, PA, Marilyn Berry of Kirksville, MO, Mary Nichols (Wes) of Grand Junction, CO and brother-in-laws: Dale Jackson of Henry’s Bend, PA and George Jackson of Kirksville, MO. His nieces and nephews: Colin, Kevin, Kelly, and Trenton O’Brien, Anthony and Vincent O’Brien, Devon and Aidan O’Brien, Michaela and Ben Herman, Kassidy, Brett, and Joshua Stevenson, Ammanuel and Joanie Berry, Antonio Ramos and Jennifer Mallett. He is also survived by many cousins, dear friends, and his beloved cat Angel. At this time, no visitations have been scheduled due to COVID-19 precautions. A Celebration of Life will be announced at a later time in Henry’s Bend, PA, and Austin, TX. In lieu of flowers, the family requests memorials or donations be made to Project Healing Waters Fly Fishing and C.A.S.T. for Kids Foundation.

The family of Patrick O'Brien created this Life Tributes page to make it easy to share your memories.