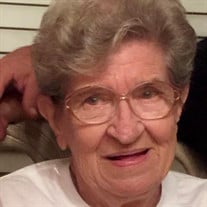 Patrica Laverne Josephus, aged 87, died peacefully on May 14, 2021, surrounded by her loved ones. Patrica known as Pat to her immediate family and Patsy to her late uncles and aunts was born June 11, 1933, in Chicago, Illinois, the daughter of Walter and Minnie Harast and brother Dennis who all proceeded her in death. Mom thoroughly enjoyed cooking, reading cookbooks, painting, crafting, sewing, knitting, crocheting, watching sporting events. She was a passionate fan of hockey (Panthers), Baseball (Marlins), basketball (Heat). She learned to cook at the early age and it became a lifelong passion. Mom was a talented artist in her own right and was accepted to the Chicago Art Institute, but instead those the path of motherhood. Those who met Mom always commented on how sweet and funny she was. She was caring and loving as all mothers are, but one story forever paints the picture of who she was; on a family camping adventure from Florida to Mexico City-not an easy task with two of her three children to run after and corral. While camping deep in Mexico, Mom noticed that some local children were eating out of the garbage can for any food they could find, Mom wouldn’t have that and she prepared a meal for them everyday we were there. She had the rare talent for showing compassion and dignity towards others in sharing this valuable lesson with her family. In 1956, Pat married Richard J. Josephus, Sr., and together they started their family in the Chicago area while both worked at Sears. In 1963 they moved to Florida, following other family members to land of sunshine. The family operated a long time Bicycle business in Plantation Florida where they settled and raised their children. In 1980, Pat and Richard went their separate ways. In her later years, she and her mother would spend some wonderful time with each other and actively crafted various items. Pat is survived by her sons, Richard (Rick) Josephus of Atlanta, GA, David Josephus of Pittsboro, NC, and Donald Josephus (Don) of Loxahatchee, FLA; two daughters in law, Jean and Crystal; three grand children; Kalynn, Donald II (DJ) and Jenna, Tyler husband of Kaylyn, Matthew husband of Jenna; four great grand children; Ava, Brody, Delilah, and Fischer. Pat requested a private burial and funeral. The family wishes to thank all of those who cared about her, laughed with her and made her life so fulfilling.

Patrica Laverne Josephus, aged 87, died peacefully on May 14, 2021, surrounded by her loved ones. Patrica known as Pat to her immediate family and Patsy to her late uncles and aunts was born June 11, 1933, in Chicago, Illinois, the daughter... View Obituary & Service Information

The family of Patricia L. Josephus created this Life Tributes page to make it easy to share your memories.