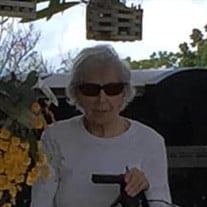 Patricia Stanton Jackson 12-9-1919 – 12-25-2021 Pat Jackson, daughter of the late John and Helen Stanton was born December 9, 1919 in Danvers, MA. She graduated from Boston University with a bachelor degree. She married Frank L Jackson December 28, 1944, he preceded her in death on August 1, 2014. Pat is survived by her two children, Robert L Jackson (Debbie) and Kimberly J Jackson. Pat was also preceded in death by her sister Jean Argetsinger of Marquette, Michigan. In 1946 the couple moved to Cincinnati, Ohio, where she and Frank built a life and a life long interest in real estate. Together they built several subdivisions in the Cincinnati area. In each subdivision, they paid homage to their respective birth states of Massachusetts and Oregon thru the naming of the streets. While Pat was primarily a homemaker, she did work for a real estate agency and was an active supporter of the Cincinnati Art Museum and the Symphony. Pat’s life is marked by her strength, loyalty and determination. She had a marriage that truly was a partnership built on love and respect. She had many lifelong friends, including Sue Hoel, who she spoke to almost daily. Sue’s mother had provided housing to the newlyweds (Pat and Frank), when they first moved to Cincinnati. An enduring friendship was created between the two families, including Frank giving Sue away in marriage to James Hoel. Pat moved to Loxahatchee Florida after the passing of her husband, where she lived with her daughter. She was able to enjoy six years of warmth, sunshine, watching the horses, keeping company with the dogs and a couple of tropical storms. She passed peacefully at home. In addition to her son and daughter, she is survived by her dogs Emma and Ricky, who both became a large part of her life and fulfilled her desire to always be a caretaker. She had a life well lived. Memorials may be made to Big Dog Ranch Rescue (bdrr.org) in Loxahatchee Florida or Peggy Adams Animal Rescue (peggyadams.org) West Palm Beach Florida

The family of Patricia S. Jackson created this Life Tributes page to make it easy to share your memories.